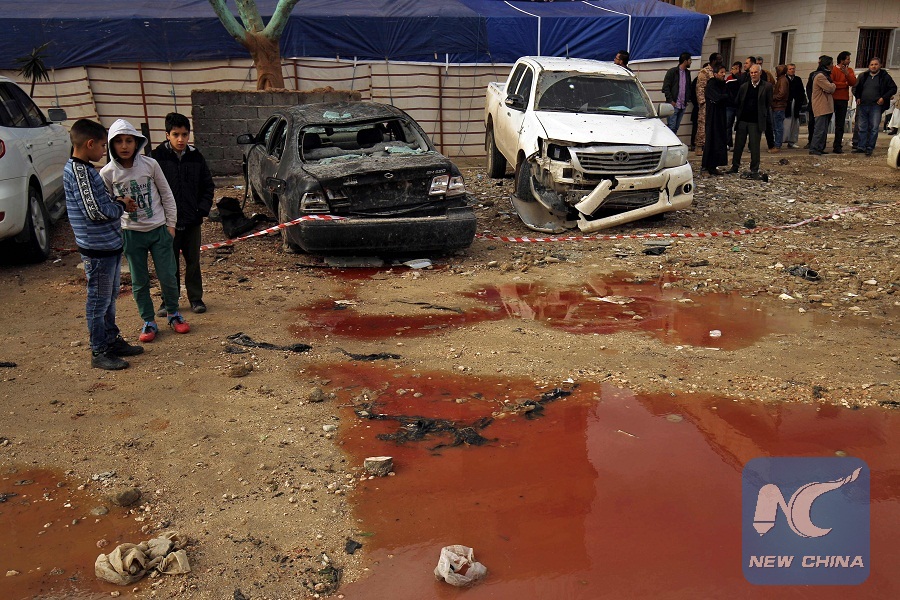 The aftermath of an explosion in the eastern city of Benghazi on January 24, 2018. Photo: AFP

The death toll of twin car bomb attacks in eastern Libyan city of Benghazi has risen to 34, a media source said Wednesday.

Gweder added that the death toll in the center was "final," as no new case was received.

Fadia Al-Barghathi, an official from the Information Office of Al-Jelaa Hospital in Benghazi, said that the hospital received 25 bodies and 51 injured people.

Two car bomb explosions hit Benghazi on Tuesday night. The first one exploded in front of a mosque as worshipers exited the mosque after night prayer. The second one exploded in the same location following the arrival of ambulances.

No group has claimed responsibility for the attacks yet.

The commander of the army's Special Investigation Unit, Ahmed Ali Al-Fitouri, was killed by one of the attacks. Brigadier General Mahdi Al-Falah, a senior Libyan intelligence official, was injured in the first explosion.

These are the most violent bombings in Benghazi for months, after the eastern army led by General Khalifa Haftar took control of the entire city and the completion of the military operations against terrorist groups in Benghazi.

The UN Support Mission in Libya (UNSMIL) earlier on Tuesday condemned the attacks.

"UNSMIL condemns the horrific bombings in al-Salmani residential neighborhood in Benghazi causing many casualties, including civilians," said the mission in a post on its official Facebook page.

The UN-backed government of national accord in Tripoli condemned the attack, announcing mourning for three days.

The eastern-based House of Representatives also condemned the attack, calling on the international community to help Libya in fighting terrorism.

The International Committee of the Red Cross announced that urgent medical assistance has been provided to Al-Jelaa Hospital in Benghazi.

"As a humanitarian response following the two car bombs in Salmani district, Al-Jelaa Hospital was supported by urgent medical donations to treat the injured," the committee said on its official Facebook page.

The assistance includes more than a ton of surgical supplies and medicines sufficient to treat 50 seriously injured people.

Libya has been suffering insecurity and chaos since the uprising that toppled former leader Muammar Gaddafi's regime in 2011. The country is plagued with unrest and political division.