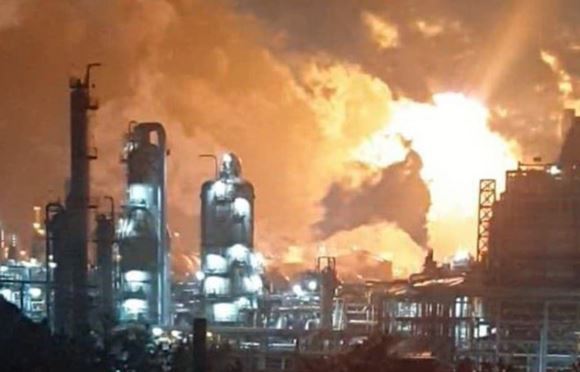 This photo, provided by a reader, shows a fire at Lotte Chemical Corp.'s plant in Seosan, South Chungcheong Province, on March 4, 2020. (Photo: Yonhap)

A total of 36 people, including factory workers and villagers near the plant in the southern city of Seosan, South Korea, were injured on Wednesday following an explosion at Lotte Chemical Corp.'s plant, Yonhap news agency reported, citing firefighting authorities.

Among the injured, two were in critical condition as of 10:00 a.m. local time.

The fire broke out following an explosion at 2:59 a.m. in the Lotte affiliate's plant in South Chungcheong Province, according to fire officials. No deaths have been reported so far.

The fire was mostly put out by 5:12 a.m., after 240 firefighters and 38 vehicles were mobilized in a major fire response.

"No evacuation order was issued because it was not a hazardous chemical leak or a situation," explained the deputy mayor.

The explosion was believed to have been caused by the leak of a compressor pipe to produce petrochemicals from naphtha. The exact cause of the incident is under investigation.

Lotte Chemical has suspended seven of its 10 facilities and plans to hold a briefing on the accident at 8:30 a.m.