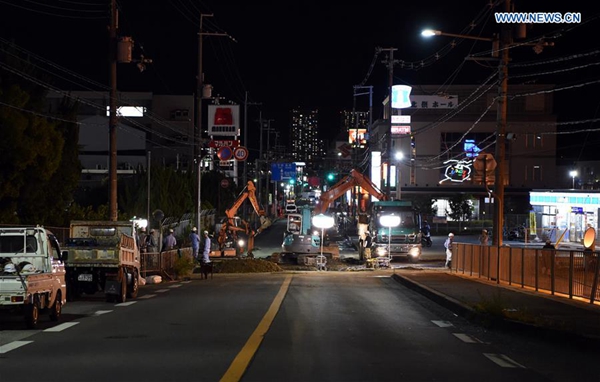 At least four people have been confirmed dead and 350 others have been injured after a 6.1-magnitude earthquake struck Osaka prefecture in western Japan on Monday.

According to local authorities, in Takatsuki City, Osaka Prefecture, a 9-year-old girl was killed on her way to school when an outer wall at her school's swimming pool collapsed and a man in his 80s was confirmed dead after his house in the city of Osaka was leveled.

Police and local district headquarters also said that another man in his 80s in the city of Ibaraki was seriously injured after being trapped under a bookshelf and was later pronounced dead after being rushed to hospital.

An 81-year-old woman from Takatsuki was also confirmed dead after a cupboard collapsed on her, local media reported Monday evening.

According to public broadcaster NHK, while local authorities have suggested the death toll is likely to rise, at least 350 people have been injured across multiple prefectures in western Japan as result of the quake.

Japan's Disaster Management Minister Hachiro Okonogi said people were buried under the rubble of a collapsed building in Osaka while local rescue officials tried to rapidly locate them.

As well as numerous outbreaks of fires and burst pipes flooding roads, at least 70 people were believed to be trapped inside elevators at one point in Osaka and nearby areas, local rescue officials said.

While no tsunami warning or advisory was given as a result of the quake, the Japan Meteorological Agency (JMA) said the 6.1-magnitude quake was upwardly revised from a preliminary 5.9 temblor, which struck Osaka at 7:58 a.m. local time.

According to Kansai Electric Power Co., more than 170,000 homes in Osaka and neighboring Hyogo prefectures suffered blackouts as a result of the quake, although power has since been restored.

Osaka Gas Co. said it has suspended gas supply to around 108,000 households in Osaka as a precautionary measure against fires and some homes are without running water in northern Osaka, local utility firms said.

Around 1,300 people have fled to emergency evacuation centers across Osaka, according to local authorities, and 1,000 public schools in Osaka, Kyoto, Hyogo and Nara prefectures called off classes and asked parents to collect their children.

Rescue officials, according to local media accounts, have been helping those stranded on trains stuck between stations to get to safety.

Along with major commuter services being seriously disrupted, the three airports in the region, officials said, which were forced to temporarily suspend their services, have now reopened although a number of flights were delayed.

Japanese Self-Defense Force (SDF) fighter jets and helicopters were deployed to the area to investigate the scene, government officials said.

The epicenter of the quake was located at a latitude of 34.8 degrees north and a longitude of 135.6 degrees east and at a preliminary depth of 10 km, which was later revised to about 13 km, according to the weather agency.

The quake logged lower 6 in some parts of Osaka prefecture and upper 5 in neighboring Kyoto prefecture on the Japanese seismic intensity scale which peaks at 7, according to the JMA.

The jolt was also felt in the nearby prefectures of Hyogo, Kyoto, Shiga and Nara.

Kansai Electric Power Co. said that no abnormalities were reported at the Takahama, Mihama and Oi nuclear plants in central Japan and in neighboring Fukui Prefecture. Officials said that all 15 nuclear reactors are functioning as normal.

Abe told a press briefing that the government will make its utmost efforts to deal with the effects of the powerful earthquake. He told reporters that government officials are operating under the instructions that saving and safeguarding peoples' lives is the priority.

The Japanese premier also said he has given instructions for local officials to carry out damage assessments as quickly as possible and do their best to save and protect lives.

Abe went on to say that he wanted the public to be kept informed as the disaster continues to unfold.

Japan's top government spokesperson, Chief Cabinet Secretary Yoshihide Suga, meanwhile, told a press briefing that so far there have been no reports of serious infrastructural damage as a result of the quake.

The JMA, for its part, has warned people in western Japan, however, to be on alert for further sizable earthquakes occurring in the next few days and for people to be vigilant for the possibility of buildings collapsing and rainy weather adding to the risk of potentially fatal mudslides henceforth.

"Frequent seismic activity is continuing in the northern part of Osaka Prefecture. Strong tremors could have raised the risk of landslides or building collapse. People in such areas are advised to watch out for further seismic activity and rain," the JMA said.

The high-intensity tremors of the quakewere owing to its shallow epicenter, seismologists said, with the government saying that Monday's quake would likely not trigger the "megaquake" off western Japan that many experts predicted will strike at some point in the not too distant future.

A quake measuring magnitude 7.3 and the maximum 7 on Japan's seismic scale struck neighboring Hyogo Prefecture in 1995, killing more than 6,000 people.