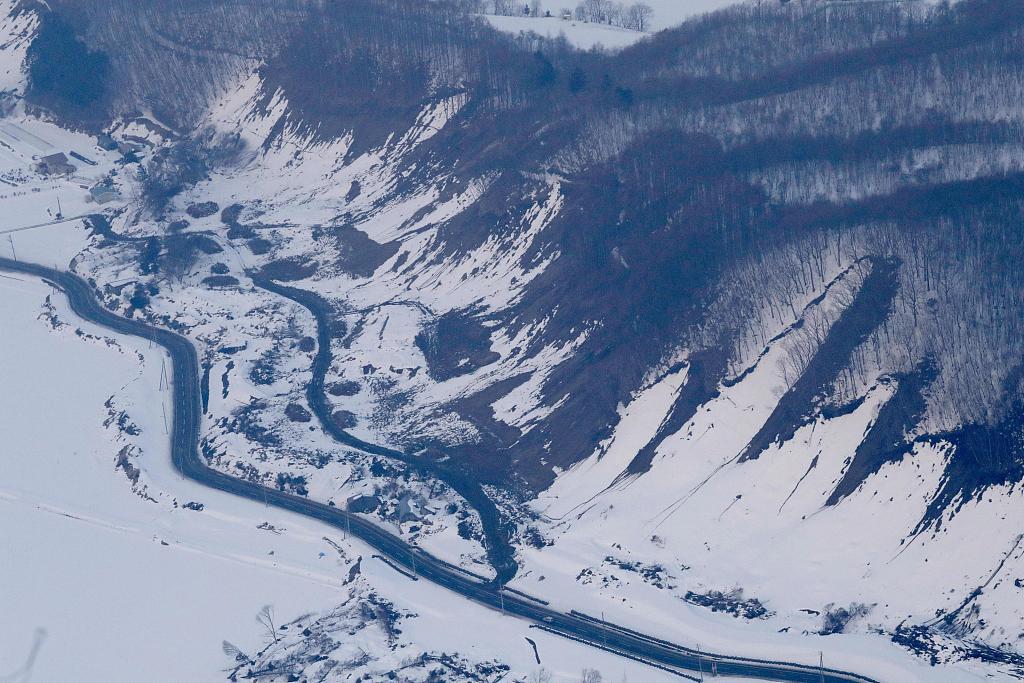 Photo taken Feb. 22, 2019, from a Kyodo News helicopter shows a mountain area in Atsuma, Hokkaido, after an earthquake with an estimated magnitude of 5.8 struck the northernmost main island of Japan the previous night. (Photo: VCG)

The temblor that struck at 9:22 p.m. local time on Thursday and registered lower 6 on the Japanese seismic intensity scale which peaks at 7 in Hokkaido, injured two men and two women.

Local authorities said they suffered minor injuries after falling during the quake.

In the hardest-hit town of Atsuma, 100 households were left without water as a result of the quake, which occurred at a depth of around 33 kilometers and authorities said that some mudslides occurred, although no major damage was reported.

On the JR Chitose Line, according to its operator, around 680 people were stranded in train carriages for hours, with some train services still disrupted as of Friday morning.

Pending safety checks, Hokkaido Railway Co. canceled 58 train services on Friday, although officials said most services in the region should resume in the afternoon.

At Hokkaido's New Chitose Airport, around 170 people were forced to stay overnight, as the mercury plunged well below zero outside.

Those stranded had to sleep under blankets handed out by staff at the airport.

The Japan Meteorological Agency (JMA) said that Thursday's quake was an aftershock resulting from a 6.7-magnitude quake that struck the area last September killing 41 people.

The weather agency warned of the possibility of more seismic activity in the area and warned of loose ground possibly leading to mudslides.