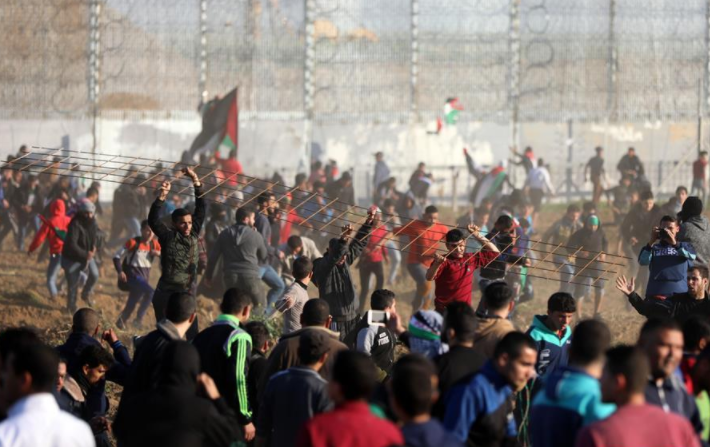 GAZA, March 23 (Xinhua) -- At least four Palestinians were injured during night protests and clashes with the Israeli soldiers in eastern Gaza Strip, close to the border with Israel, medics said.

Four Palestinians were shot and injured by Israeli soldiers' gunfire in eastern Gaza Strip, and one of them is in critical condition, said Health Ministry Spokesman in Gaza Ashraf al-Qedra.

The night confusion unit, which is part of the rallies called "the Great March of Return," began on Saturday night with activities along the border between eastern Gaza Strip and Israel, according to local media reports in Gaza.

The participants burned tires, exploded dozens of sound bombs, and disturbed the residents of the Israeli small towns near the border.

The Israeli media reported that the night confusion unit members threw around 300 sound bombs in three hours at the Israeli army forces stationed on the border, adding that no injuries were reported.

The Palestinians in the Gaza Strip will mark one year for "the Great March of Return" on March 30.

Al-Qedra said that since the outbreak of the rallies, the Israeli army killed at least 261 demonstrators and wounded more than 29,000 others. Around 40 percent of them were injured by live gunfire.