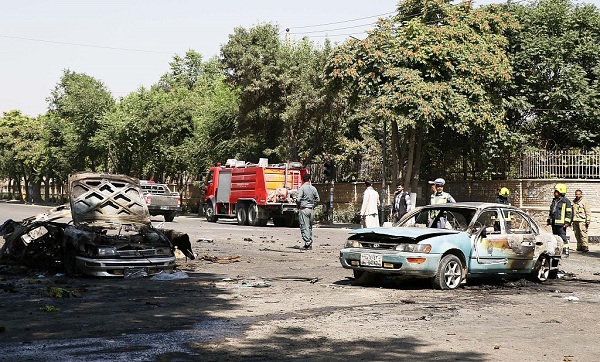 Afghan security officials inspect the scene of a bomb near the University of Afghanistan in Kabul, Afghanistan on July 19, 2019. (Photo: AP)

"A bomb went off at 07:10 a.m. local time at the southern gate of Kabul University when a number of students gathered for examination, killing four people including a traffic police and injuring 16 others including a girl," Faramarz told Xinhua.

Two cars were also destroyed in the blast, the official added.

Meantime, Wahid Mayar, the spokesman for Public Health Ministry tweeted that six dead bodies and 27 injured persons had been taken to hospital following the blast.

No group has yet to claim responsibility for the blast.

Earlier, Taliban outfit has claimed responsibility for the deadly attack on a police station in southern Kandahar province that left 12 dead and more than 90 others injured on Thursday.