ISLAMABAD, May 14 (Xinhua) -- At least four policemen were killed and 12 others injured on Monday evening in a bomb blast in Quetta district of Pakistan's southwest Balochistan province, an official said. 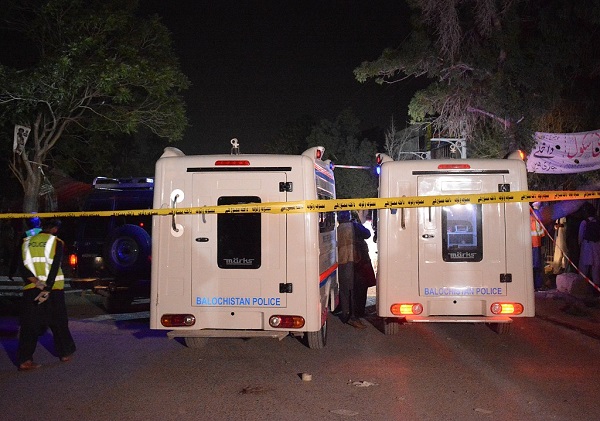 Pakistani security members inspect the area after a blast, in Quetta, Pakistan on May 13, 2019. (Photo: VCG)

Wasim Baig, the spokesperson of the Civil Hospital Quetta where the bodies and injured were shifted, confirmed that four police personnel were killed while one of the injured is in critical condition.

Police chief of the province Mohsin Hassan Butt said that the blast hit a police squad performing security duty outside a mosque where dozens of people were offering evening pray in the satellite town area of Quetta, the capital of Balochistan.

The police officer said an improvised explosive device was planted in a motorcycle parked near a police mobile and it was detonated with a remote-controlled device. The huge explosion destroyed four vehicles besides damaging several nearby shops.

The officer claimed that police had diffused another bomb planted nearby the site. Police and paramilitary forces have cordoned off the area and launched a search operation in the city. No group has claimed the attack yet.

Prime Minister Imran Khan condemned the attack, condoled the grieved families of the deceased policemen, and asked the authorities concerned to provide the best available medical facilities to the injured. He said the government has firm resort to end the menace of terrorism in the country.