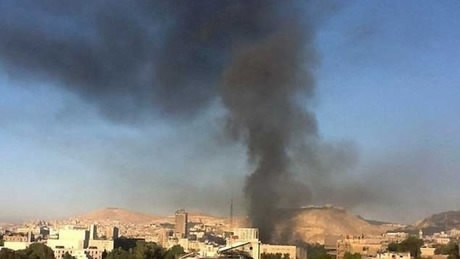 The rockets landed at the military base near Baghdad airport at the southwestern edge of the city, according to a statement by the media office affiliated with the Iraqi Joint Operations Command.

The Iraqi forces searched the areas around the military base and found a rocket launcher left with some unfired rockets because of malfunction, the statement said, without detailing when and which the military base was attacked.

Meanwhile, an Interior Ministry official told Xinhua that the army base targeted by rockets is where US troops were stationed, and the attack wounded six Iraqi soldiers and caused damage to some buildings.

Military bases housing US troops across Iraq and the heavily fortified Green Zone in central Baghdad have been frequently targeted by insurgents' mortar and rocket attacks.

Over 5,000 US troops have been deployed in Iraq to support the Iraqi forces in the battles against Islamic State (IS) militants, mainly providing training and advice to the Iraqi forces.

The troops are part of the US-led international coalition that has been conducting air raids against IS targets in both Iraq and Syria.

The incident came as mass demonstrations have continued in Baghdad and other cities in central and southern Iraq since early October, demanding comprehensive reform, accountability for corruption, improvement of public services and job opportunities.