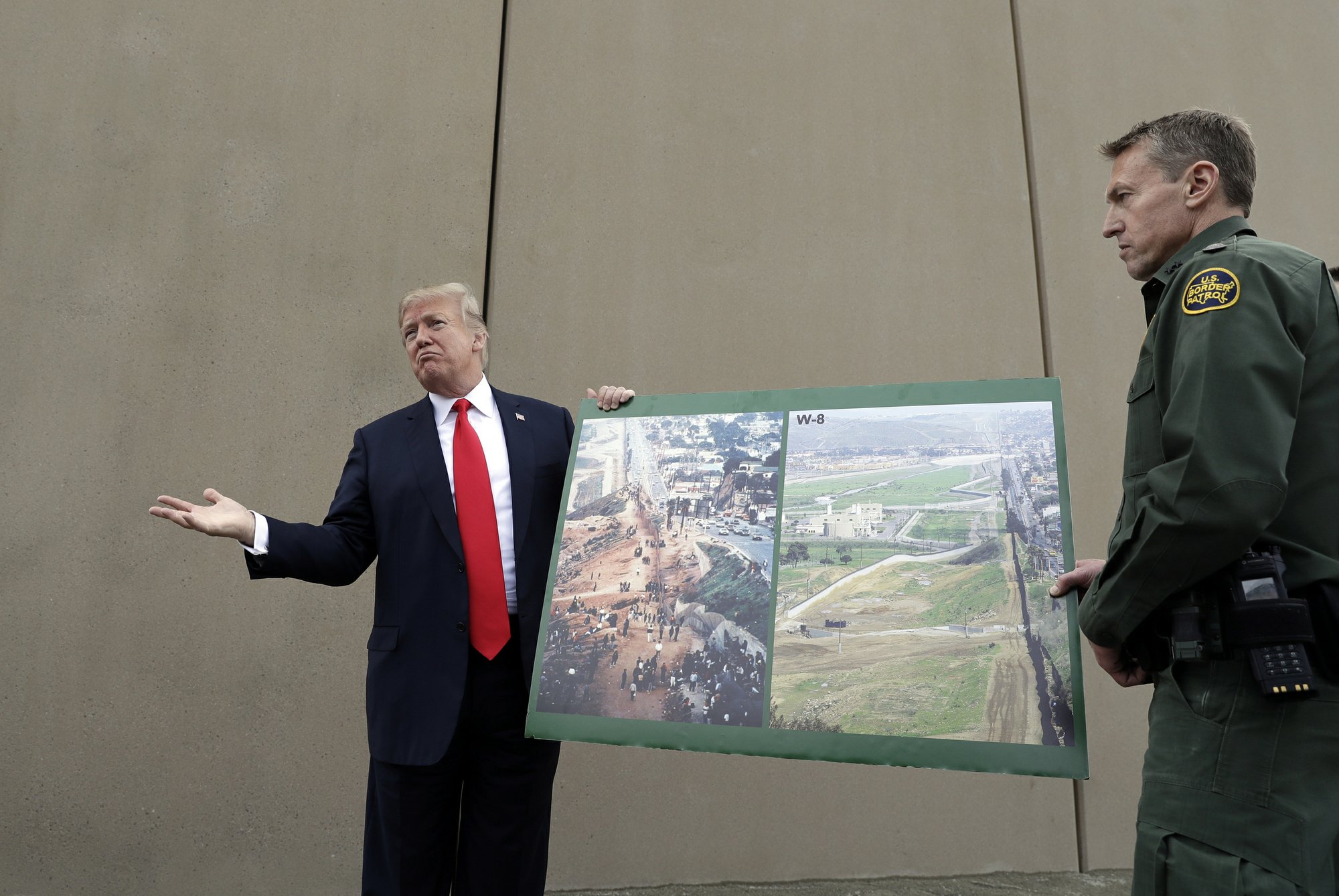 In this March 13, 2018, file photo, President Donald Trump holds a poster with photographs of the US - Mexico border area as he reviews border wall prototypes in San Diego with Rodney Scott, the US Border Patrol's San Diego sector chief. (Photo: AP)

A small bipartisan group of senators planned to introduce a resolution Thursday aimed at blocking US President Donald Trump’s declaration of a national emergency to finance additional miles of barriers along the US-Mexico border.

The proposal is identical to the one-sentence measure the Democratic-controlled House approved earlier this week. The new legislation gives the Senate and the four centrist sponsors — two Republicans and two Democrats — a chance to put their stamp on congressional opposition to Trump’s move.

The senators’ move was the latest evidence that significant numbers of lawmakers are not shying away from a fight with Trump. He has threatened to veto Congress’ effort to keep him from diverting billions of extra dollars for building the wall. It seems unlikely that the House and Senate could garner the two-thirds majorities that would be needed to override a veto.

The showdown puts some GOP lawmakers in an uncomfortable political crunch, with many leery of opposing Trump and angering his base of supporters. But they also fear the precedent his move would set for future Democratic presidents to declare emergencies for their own purposes, and worry that the money he would shift to barrier construction could come from home-state projects.

The other sponsors are Sens. Tom Udall, D-N.M., Jeanne Shaheen, D-N.H., and Lisa Murkowski, R-Alaska. Only Murkowski does not face re-election next year.

Republicans say a Senate vote on the effort to thwart Trump is likely in two weeks.

Under a 1976 law, the resolution cannot be filibustered and would need only a simple majority of 51 votes to pass the Senate.

So far, three Republicans have said they would vote to overturn the emergency. That’s one short of the four that would be needed to prevail, assuming that all 47 Democrats and their independent allies vote as expected to rescind the declaration.

Trump has said he needs additional barriers to halt drugs, human traffickers and unauthorized immigrants from slipping into the US Congressional opponents say there is no real border crisis and say Trump is abusing his powers by trampling on the control the Constitution assigns to Congress over spending.

In legislation that ended the 35-day partial federal shutdown, Congress limited spending for barriers to just under $1.4 billion. Trump featured the wall as a central plank of his presidential campaign and repeatedly said Mexico would pay for it, which has not happened.

Several lawsuits have also been filed aimed at derailing the declaration, which could at least prevent Trump from getting the extra money for months or longer.