4 tech-giant CEOs get earful on Hill 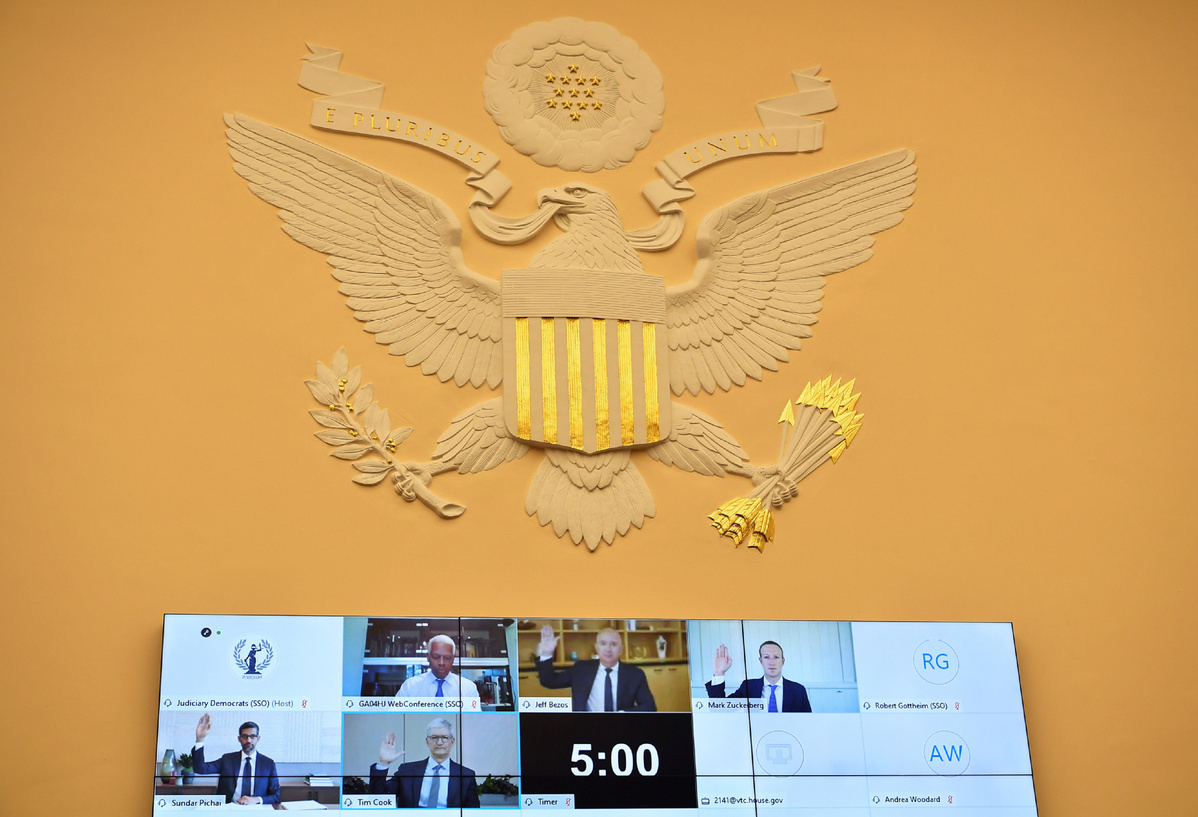 Four prominent tech CEOs were bluntly questioned on Wednesday, having to answer for their companies' practices as a congressional committee concludes its investigation of market dominance in the technology industry.

The executives — Facebook's Mark Zuckerberg, Amazon's Jeff Bezos, Google's Sundar Pichai and Apple's Tim Cook — parried a bipartisan blitz by the House Judiciary Committee panel with data stressing how competitive their markets are and how much consumers value their products.

They also faced concerns about unfair competition and political bias.

The four men testified remotely to lawmakers, most of whom were sitting in masks inside the hearing room in Washington DC. And there also was a fair share of bickering among House members on proper mask-wearing.

In his opening statement, Bezos, the world's richest person, who was making his first appearance before Congress, said Amazon has invested $270 billion in the US over the last decade and created more than 700,000 jobs indirectly.

"To fulfill our promises to customers in this country, we need American workers to get products to American customers. When customers shop on Amazon, they are helping to create jobs in their local communities," he said, adding that Amazon hired an additional 175,000 employees during the coronavirus pandemic.

"Any single action by one of these companies can affect hundreds of millions of us in profound and lasting ways," Representative David Cicilline, a Rhode Island Democrat, said. "Simply put: They have too much power."

Cicilline accused Google of leveraging its dominant search engine to siphon ideas and information from other websites and of manipulating its results to drive people to its own digital services.

Pichai asserted that Google tries to provide the most relevant information to users of its search engine to keep them from defecting to a rival service such as Microsoft's Bing.

"Big Tech is out to get conservatives," said Representative Jim Jordan of Ohio. "That's not a suspicion, that's not a hunch. That's a fact."

Jordan then listed examples where conservative posts and accounts were either silenced or taken down. He also asked the CEOs their view of "cancel culture", referring to attacks of people on social media over their online posts.

All four CEOs said they supported free speech and agreed that cancel culture was a problem.

Jordan also argued that tech companies' default answer about the posts' removals being "just a glitch" are bogus.

"If I had a nickel for every time I hear, 'It' just a glitch', I wouldn't be as wealthy as our witnesses, but I'd be doing all right," Jordan quipped.

President Donald Trump tweeted before the hearing that, "If Congress doesn't bring fairness to Big Tech, which they should have done years ago, I will do it myself with Executive Orders.

Democrats also pressed the executives on their efforts to remove hate speech from their platforms. All four also said they were committed to racial diversity in hiring at their companies when asked by Representative Lucy McBath, a Georgia Democrat.

In its investigation, the Judiciary subcommittee is seeking to determine if competition policies and century-old antitrust laws are adequate for overseeing the tech giants.

Cicilline also said that during the pandemic, "these giants stand to profit" as many more people work and shop online.

Cicilline also accused Google of stealing reviews from the company Yelp Inc and said that the search giant threatened to remove the company from search results if it objected.

"We conduct ourselves to the highest standards," Google CEO Pichai said, disagreeing with the characterization that the company steals content from other businesses to populate its search engine and keep users on its own services.

Zuckerberg was asked about Facebook's purchase of the popular Instagram app in 2012, and whether it was acquired because it was a competitive threat.

He said that the deal had been reviewed by the Federal Trade Commission and that Instagram then was a tiny photo-sharing app rather than a social media phenomenon.

"People didn't think of them competing with us in that space," he said.

Democratic Representative Joe Neguse of Colorado asked the Facebook CEO: "You did tell one of Facebook's senior engineers in 2012 that you can, quote, 'Likely just buy any competitive startup, but it will be a while until we can buy Google.' Do you recall writing that?"

"Congressman, I don't specifically, but it sounds like a joke," Zuckerberg replied.

"Facebook has used its market power to either purchase or replicate the competition," Neguse alleged. "And Facebook, Facebook Messenger, WhatsApp, Instagram are the most now downloaded apps of the last decade — and your company, sir, owns them all. And we have a word for that — that word is monopoly."

Zuckerberg countered that Facebook grew "the American way", by starting out with nothing and providing valuable products.

"Although people around the world use our products, Facebook is a proudly American company. We believe in values — democracy, competition, inclusion and free expression — that the American economy was built on."

The prominent tech website CNET summed up the reach of the four tech giants, which combined are worth about $5 trillion: "Facebook, the world's largest social network, has roughly the same number of users as the populations of the two largest countries, China and India, combined.

"Amazon controls 38 percent of US online sales, more than six times the size of Walmart's US web business, its nearest competitor.

"Apple's App Store is the only way for most developers to get their software onto the huge iPhone and iPad customer base, and Apple takes a cut of those installations.

"Google has a lock on search, processing about 90 percent of all web searches around the world."

A detailed report with antitrust allegations against the companies and recommendations on how to restrain their market power could be released by late summer or early fall by the House committee, which has amassed 1.3 million documents from the companies, committee aides said.

In a related matter, Kevin Mayer, CEO of TikTok released a statement Wednesday saying that while his social media company deserves the same scrutiny as its competitors, it believes it is under more of a microscope for geopolitical reasons.

"The entire industry has received scrutiny, and rightly so. Yet, we have received even more scrutiny due to the company's Chinese origins," Mayer said. … "We believe it is essential to show users, advertisers, creators, and regulators that we are responsible and committed members of the American community that follows US laws.

"TikTok has become the latest target, but we are not the enemy," he concluded.