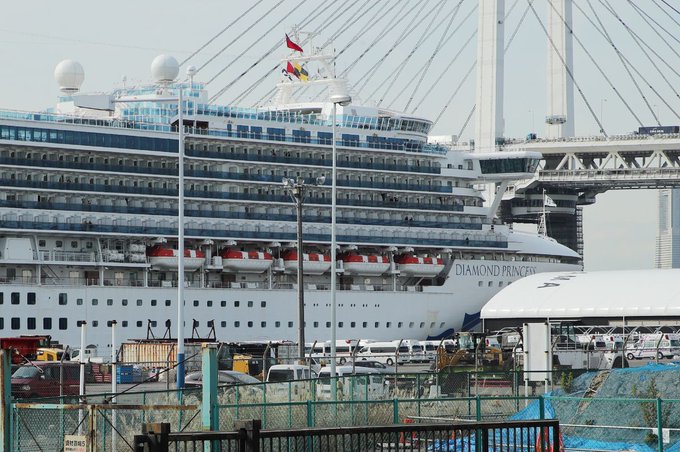 TOKYO, Feb. 12 (Xinhua) -- An additional 40 people on a cruise ship quarantined in Yokohama have tested positive for the novel coronavirus, bringing the total of onboard infections to 174, Japanese authorities said Wednesday.

Of the 40 new cases, a quarantine officer from the health ministry who was carrying out health inspections aboard the Diamond Princess has also tested positive, they said.

The officer had been on the ship between Feb. 3-4, taking temperatures of passengers and crew members and collecting questionnaires on their health.

The health ministry said that although the quarantine officer was using a mask and gloves and had been disinfecting his hands between seeing each passenger, he had not been wearing protective clothing or goggles.

Among the other newly infected cases on board the ship, 29 are passengers and 10 are crew members, officials said, adding that one person is a female teenager, the first infection found in a person of that age in Japan.

Around 3,600 passengers and crew members will be confined to the quarantined Diamond Princess until at least Feb. 19 as tests continue to be carried out, health ministry officials said.

The ship has been kept in quarantine off the port of Yokohama since a passenger on board from Hong Kong was found to be infected with the pneumonia-causing virus.

The 80-year-old passenger flew to Tokyo in mid-January and boarded the cruise ship in the city on Jan. 20, with passengers and crew from 56 countries and regions.

According to local media reports, passengers have been largely confined to their cabins, though they have been allowed to spend some time on deck while being monitored by staff. Crew members, however, are sharing cabins and are required to move around the ship more frequently.

Four men all in their 60s or 70s, who were previously found to have been infected by the virus and taken to hospital from the quarantined Diamond Princess ship, are in severe condition, the health ministry said.

Two of the four elderly men are receiving treatment in intensive care units, while the other two are suffering with respiratory issues and need assistance breathing, according to ministry officials.

Japan is stepping up efforts to contain the spread of the virus, as the number of confirmed cases continues to rise.

The government has urged the public to remain calm and disregard a growing number of social media rumors concerning the outbreak.

Not including those infected on the quarantined ship, the number of confirmed coronavirus cases in Japan stands at 29.