43 refugees evacuated from Libya to Niger 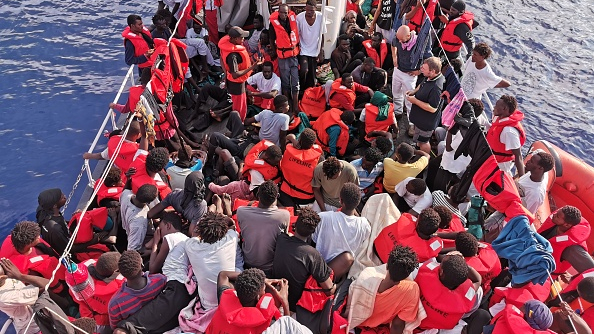 About 100 migrants are crowded together on deck of the rescue ship “Eleonore”. (Photo: CGTN)

The United Nations High Commissioner of Refugees (UNHCR) on Friday said that 43 refugees have been evacuated from Libya to Niger.

“43 refugees safely landed in Niger in the latest UNHCR humanitarian evacuation from Libya and will be resettled to Switzerland in a later stage.” UNHCR tweeted earlier Friday.

A few days ago, the UNHCR announced the evacuation of 306 refugees from Libya to Rwanda.

“As violence in Tripoli intensifies, these evacuations have never been more urgent. But with thousands of refugees still at risk in detention centers and urban areas in Libya, we need states to help us get more refugees out of the country much more quickly.” said Vincent Cochetel, UNHCR special envoy for the central Mediterranean.

The UNHCR estimated that 4,500 refugees and asylum seekers are now being held in detention centers in Libya, confirming that they face risk of “being caught up in the continued clashes”.

Thousands of illegal immigrants, mostly Africans, chose to cross the Mediterranean from Libya towards Europe, due to the state of insecurity and chaos in the North African nation following the overthrow of former leader Muammar Gaddafi in 2011.

Libya’s east-based army and the UN-backed government have been fighting since early April over control of Tripoli, which has claimed many lives including immigrants.