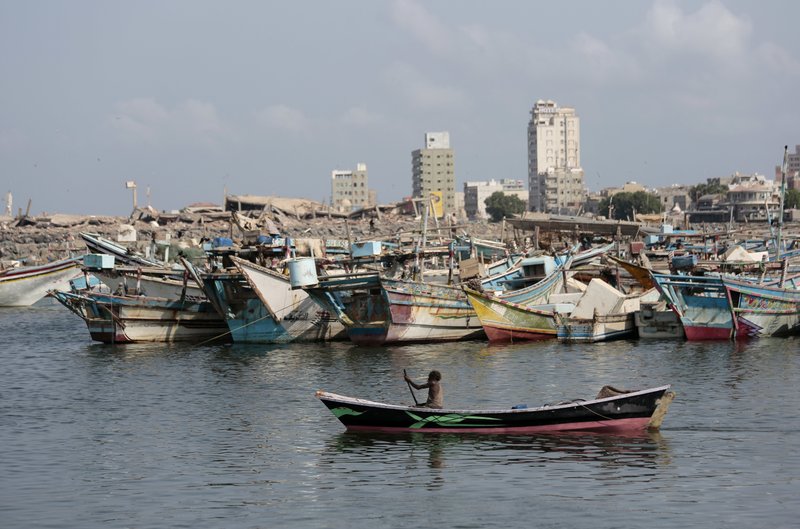 Hundreds of thousands of Yemenis from the Hodeida area have been forced to flee amid a Saudi-led coalition offensive to take the key Red Sea port city from Shiite rebels, the United Nations’ refugee agency said Friday, as fierce battles continue to rage in the area.

Some 445,000 of the Hodeida governorate’s residents have fled since June, a figure that underscores the dire situation in and around the city that serves as the main entry point for food and aid, the UNHCR said. The governorate’s population is around 3 million, according to figures from the Norwegian Refugee Council.

The UNHCR also expressed concern over the safety of those trapped in Hodeida as the intensified military operations “are increasingly confining populations and cutting off exit routes.” Figures on those still in Hodeida are difficult to gauge, the agency added.

Yemeni government forces supported by the coalition’s air and naval forces continue to engage in heavy fighting with the rebels, known as Houthis. The fighting has killed dozens of combatants from both sides, with dozens of military vehicles destroyed or burning along the front lines.

In a Friday statement, Yemen’s internationally recognized government based in the southern city of Aden said its forces are advancing toward the north and west of Hodeida and across all fronts with cover from the coalition.

Also on Friday, the World Health Organization said the violence in Hodeida is in close proximity to the city’s health facilities, impeding their ability to function and restricting the movement of health staff, patients and ambulances.

The Saudi-led coalition’s latest push toward Hodeida comes as Yemen’s civil war is a few months away from entering its fourth year. The coalition intervened in Yemen in March 2015 with the aim of defeating the Iran-aligned rebels and to restore the government of Abed Rabbo Mansour Hadi. But the coalition has recently come under mounting international pressure to end the war that has resulted in what the UN says is the world’s worst humanitarian crisis.

The fighting around the city, a vital lifeline for most of Yemen’s population, threatens to worsen Yemen’s already-dire humanitarian situation and risks the obstruction of crucial assistance to the country endangering the lives of millions of Yemenis.

The Norwegian Refugee Council warned of the repercussions the continued fighting may have on millions of Yemenis. The council estimates the humanitarian cost of the war to have reached almost $3 billion in 2018 alone, it said in a statement.

“We are now warning that by allowing this to go on, parties to the conflict and their international backers will be responsible for the death, injury and suffering of millions of people,” Mohamed Abdi, the council’s director in Yemen, said in a statement. “Senseless attacks on civilians, evidence of a starving population and desperate pleas from humanitarian witnesses have done little more than elicit condolences from an international community that could have stepped on the brakes long ago.”

The US and UK, major arms suppliers to the Saudi coalition, have recently called for a cease-fire in Yemen and the launch of UN-led political talks to end the Saudi-Iran proxy war. On Friday, the UN special envoy for Yemen Martin Griffiths said on his official Twitter account that consultations with Yemen’s warring parties to finalize logistical arrangements for a new round of peace talks are underway. Griffiths’ latest effort to revive peace talks in September fell through after the Houthis failed to attend.