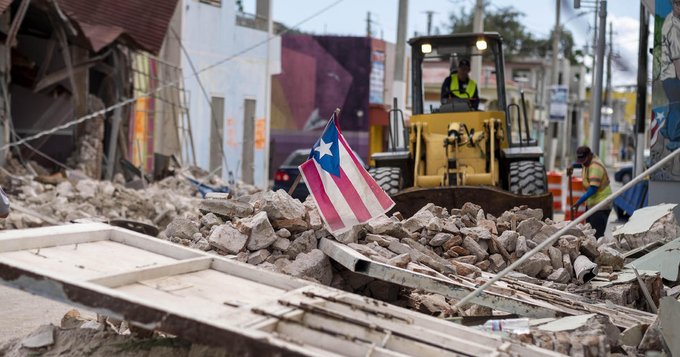 WASHINGTON, Jan. 25 (Xinhua) -- A 5.0-magnitude earthquake rocked Puerto Rico on Saturday, as the Caribbean island has experienced tremors nearly on a daily basis since late December.

The quake occurred at 4:20 p.m. local time (2020 GMT), with its epicenter around 16 km south of Indios in the southern part of the island and a shallow depth of 13 km, according to the U.S. Geological Survey.

There has been no immmediate report of deaths or injuries, but it raised concerns about unstable structures in the region that has been suffering quakes for nearly a month.

At least one small landslide was reported as a result of the latest quake, according to local media.

"We felt it really hard," said Danny Hernandez, a spokesman for the town of Guayanilla near the epicenter.

He told local media that authorities were patroling the area to investigate any potential damage.

Hundreds of people were evacuated Friday from earthquake shelters that flooded after heavy rains hit the island, according to reports.

Puerto Rico Governor Wanda Vazquez declared a state of emergency on Jan. 7, after two earthquakes of magnitude 6.4 and 5.8 hit the island.

Puerto Rico, with a population of 3.4 million, is an unincorporated territory of the United States, located in the northeast Caribbean Sea, some 1,600 km southeast of Miami, Florida.