JAKARTA, Nov. 12 (Xinhua) - A 5.1-magnitude earthquake rocked Indonesia's eastern province of Maluku on Tuesday, but there was no risk of a tsunami, the Meteorology, Climatology and Geological Agency (BMKG) said. 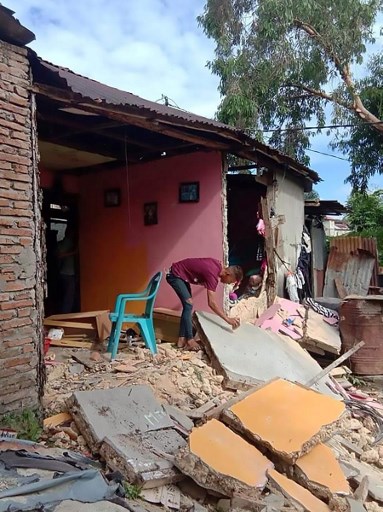 The quake that took place at 17:10 Jakarta time was strongly felt in Maluku provincial capital of Ambon and port city of Kairatu at a scale of IV Mercalli Modified Intensity (MMI).

"As of now there has been no report of significant damages in the affected areas," Head of BMKG Earthquake and Tsunami section Rahmat Triyono said.

The quake that occurred in the coordinated points of 3.49 degrees South Latitude and 128.35 degrees East Longitude at a depth of 10 km in Maluku was a shallow earthquake, he added.

"Based on the modeling of the strike-slip mechanism, the earthquake does not have potential to prompt a tsunami," Rahmat said.

Maluku suffered frequent earthquakes since the largest one with a magnitude of 6.5 on Sept. 26, 2019, that killed 41 people and injured over 1,570 others.

The BMKG has recorded over 1,100 aftershocks in the province since then.