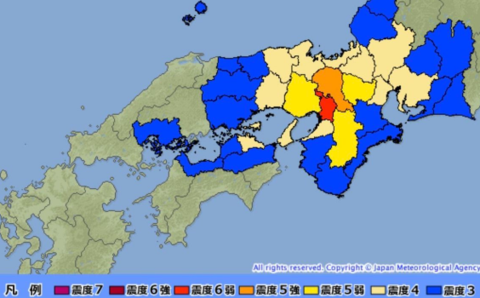 The temblor was centered in the northern part of Osaka prefecture, with the epicenter at a latitude of 34.8 degrees north and a longitude of 135.6 degrees east and at a depth of 10 km.

The quake logged lower 6 in some parts of Osaka prefecture and upper 5 in neighboring Kyoto prefecture on the Japanese seismic intensity scale which peaks at 7, according to the JMA.

So far no major damage or injuries were reported, and no tsunami warning has been issued.