MANILA, July 27 (Xinhua) -- Five people were killed and 12 injured in two earthquakes that struck the archipelago of Batanes north of Philippines' main Luzon island on Saturday, a local official said. 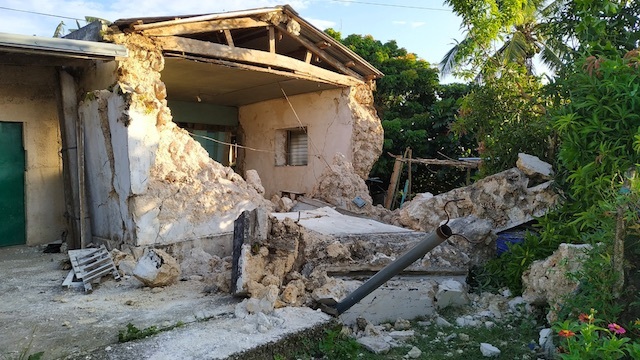 The wall of a house collapses after a magnitude 5.4 earthquake struck Batanes before dawn on Juy 27, 2019. (Photo: RAPPLER.com)

Batanes Governor Marilou Cayco told local media that five people were reported dead and 12 injured in the first quake of 5.4-magnitude that struck before dawn Saturday. A historic church and other houses were damaged, she added.

The Philippine Institute of Volcanology and Seismology (Phivolcs) said the second quake hit at a depth of 43 km about 19 km northwest of Itbayat. Both quakes were tectonic in origin.

Phivolcs director Renato Solidum told a local radio station that a quake of such intensity could cause slight damage to houses and infrastructure.

According to the institute, the tremors were also felt in the towns of Basco and Sabtang.

Aftershocks are expected, the institute said.