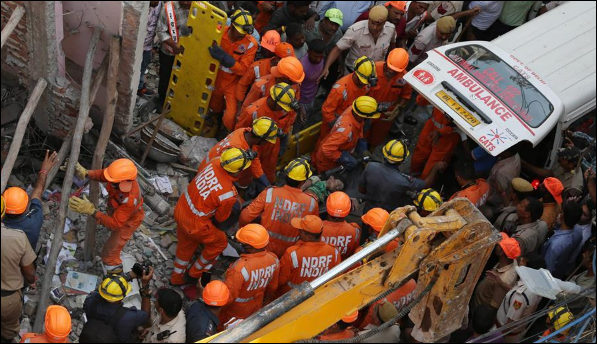 Indian National Disaster Relief Force personnel work at the site of a collapsed building in northwest Delhi, India on Sept. 26, 2018. At least five persons, including four children, were killed and seven others injured in a residential building collapse in the Indian capital Wednesday, officials said. (Photo: Xinhua)

At least five persons, including four children, were killed and seven others injured in a residential building collapse in the Indian capital Wednesday, officials said.

"The three-storeyed residential building caved in this morning. While the bodies of two children were pulled out of the debris soon after the launch of rescue operations, three more bodies were recovered later in the day," a police official said.

Among the three bodies pulled out of the debris later, two were children while the other was a woman, he added.

"The seven people rescued alive sustained injuries and have been admitted to a nearby hospital," the official said.

A civic official said that the building was termed dangerous as it was over 20 years old. "A probe has been ordered into the incident," the official added.

Building collapses are common in India, particularly during the monsoon season. Poor construction practices are often to blame for such accidents.