5 killed in suicide bombing in Mogadishu 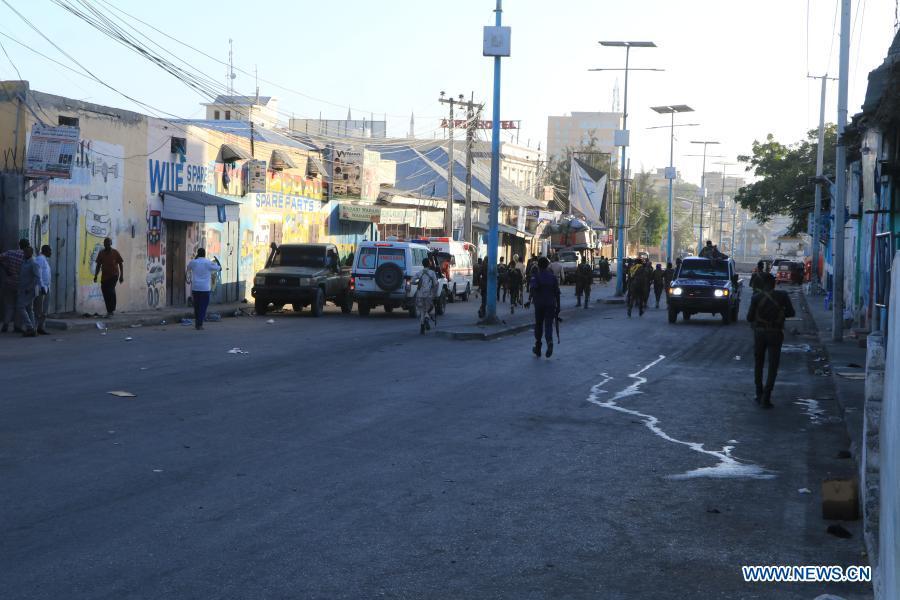 Somalia's security forces are seen near Afrik Hotel in Mogadishu, capital of Somalia, Jan. 31, 2021. A car packed with explosives exploded at Afrik Hotel near a busy security checkpoint near Aden Adde International Airport in Mogadishu, capital of Somalia on Sunday evening. Al-Shabab fighters stormed inside the hotel after the first blast and at least five were killed in the attack, police and witnesses said. (Xinhua/Hassan Elmi)

MOGADISHU, Jan. 31 (Xinhua) -- At least five people were killed and several others injured in a suicide car bombing in the Somali capital Mogadishu on Sunday evening, police and witnesses said.

The latest attack started at 5.00 p.m. when a car packed with explosives exploded at the Afrik Hotel near a busy security checkpoint near Aden Adde International Airport in Mogadishu.

A police officer who requested anonymity told Xinhua that al-Shabab stormed inside the hotel after the first blast went off outside the hotel.

"I can confirm that five people were killed in the attack but will give full details later," said the police officer who declined to be named.

Al-Shahab which is fighting to overthrow the internationally-backed government claimed responsibility for the latest attack through its media affiliates, saying its fighters were targeting government officials who were meeting in the facility.

Afrik Hotel is a popular hotel which is frequented by government officials and located near Mogadishu airport.

Witnesses said they could hear huge gunfire inside the hotel.

"We could hear heavy gunfire inside the Afrik Hotel, heavily armed government forces arrived at the scene," Ali Abdi, a witness told Xinhua.

Unconfirmed reports said the former State Minister of Defense is among the survivors of the attack and most of the occupants at the hotel have been rescued.

On February 8, Somalia is scheduled to hold a presidential election.

The insurgents have stepped up their assault against the government and African Union Mission in Somalia bases across south and central parts of the Horn of Africa nation. Enditem