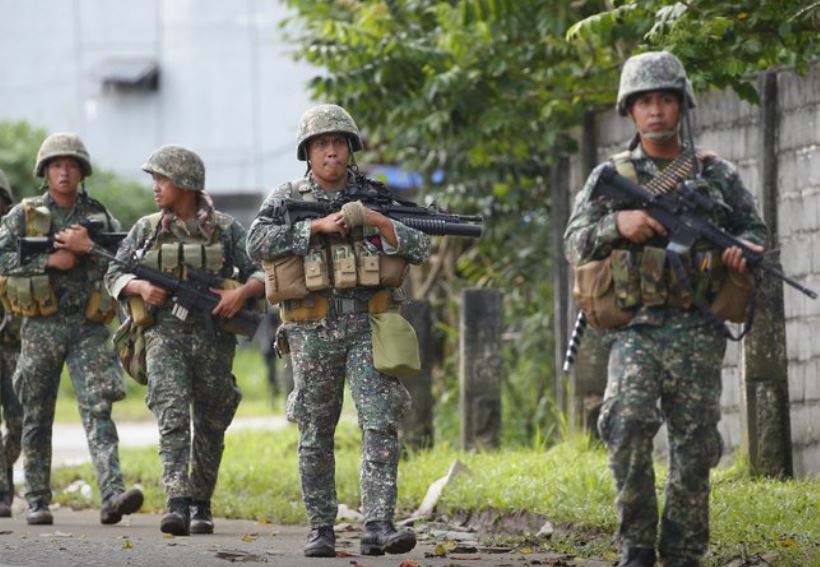 Philippine marines walk to the frontline in the continuing assaults to retake control of some areas of Marawi city Sunday, May 28, 2017 in southern Philippines. (Photo: AP)

Major Arvin Encinas, spokesman for the military's Western Mindanao Command, said the alleged bombers were also killed in the attack on the Army's first Brigade Combat Team headquarters in Kajatian, a village in Indanan town in Sulu.

Encinas said the first bomber managed to detonate the explosives taped on his body near the gate, killing the three soldiers manning the gate. Another bomber managed to slip into the gate and blew himself up injuring 12 other soldiers.

After the two successive explosions, the camp was reportedly attacked by gunmen with mortar shelling and sniper fires for about an hour.

"This attack is meant to disrupt the intensified security operations tempo following a series of recent operational gains in the area," Zagala said.

"We vow to respond with formidable resolve," Zagala added, vowing to further intensify efforts to crush the terror groups.

The Abu Sayyaf Group, estimated to have 400 members, operates in the waters off the west coast of Mindanao island in the southern Philippines, mainly in the Philippine provinces of the Sulu Archipelago -- namely Basilan, Sulu, and Tawi-Tawi, the Zamboanga Peninsula, and Mindanao -- but has also conducted cross-border operations into eastern Malaysia.

The Philippine government has formed an entire army division to hunt down the Abu Sayyaf militants blamed for a series of kidnapping and bombings in the southern region, including the Jan. 27 twin bombings in a church in Jolo, Sulu that killed 26 and injured more than 100.

On June 16, a battalion of marine soldiers were sent to Sulu to conduct "focused operations" aimed at crushing the Abu Sayyaf group.