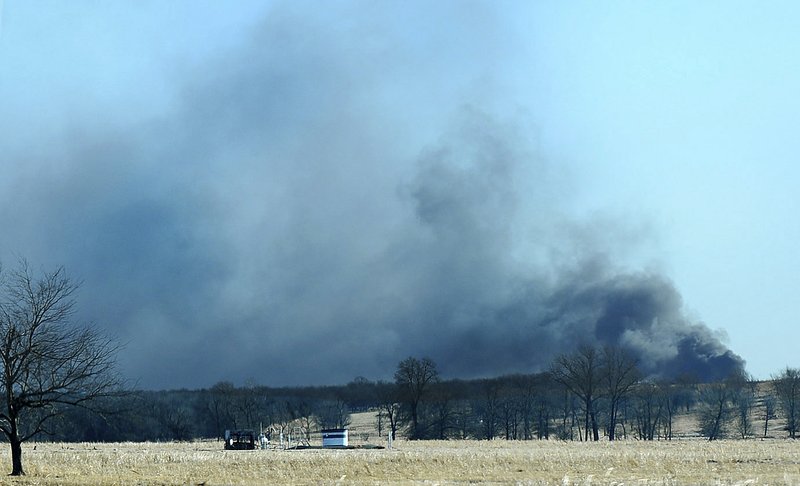 Five people are missing after a fiery explosion ripped through an eastern Oklahoma drilling rig Monday morning, sending plumes of black smoke into the air and leaving a derrick crumpled on the ground, emergency officials said.

Aerial footage shows several fires still burning at the site, and the derrick, the towering metal structure above the well, collapsed onto the ground. The explosion occurred west of the town of Quinton, about 100 miles (161 kilometers) southeast of Tulsa.

More than 20 employees were at the well site when the explosion occurred, said Pittsburg County Sheriff Chris Morris.

“Most everybody was taken off the site and taken to a secure site here in Quinton,” he said.

Morris confirmed that five people were unaccounted for, but he said could not confirm any fatalities or injuries.

Amy Elliott, a spokeswoman for the Oklahoma medical examiner’s office, said she wouldn’t be able to confirm any fatalities until the fire is extinguished and investigators can get to the scene of the explosion.

An emergency official says five people are missing after an explosion at a drilling rig in eastern Oklahoma.

“I pray there’s not, but we just don’t know yet,” Elliott said.

Oklahoma Office of Emergency Management spokeswoman Keli Cain said state environmental and regulatory officials have been notified and were heading to the scene. A local emergency dispatcher said the sheriff, undersheriff and county emergency management director are all on the scene.

The drilling site was being operated by Oklahoma City-based Red Mountain Energy, said Matt Skinner, a spokesman for the Oklahoma Corporation Commission, which regulates oil and gas operators in the state. Telephone and email messages left with Red Mountain were not immediately returned.

Skinner said a company that specializes in rig fires and other well control problems also responded to the blaze.