Authorities on Sunday released the names of the pilot and two couples who died after a hot air balloon they were riding in struck a power line and crashed onto a busy street in Albuquerque. 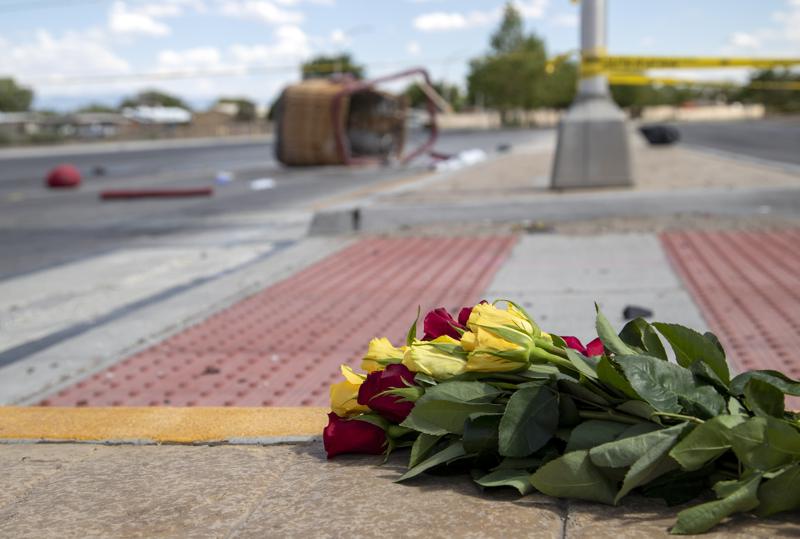 A bouquet of flowers from a mourner is placed near the basket of a hot air balloon which crashed in Albuquerque, N.M., Saturday, June 26, 2021. (Photo: AP)

New Mexico State Police on Sunday identified the pilot as 62-year-old Nicholas Meleski and the four passengers as Susan Montoya, 65; John Montoya, 61; Mary Martinez, 59; and Martin Martinez, 62. The ages of the Martinez couple were reversed when authorities released their identities Saturday.

All were Albuquerque residents.

State Police said John Montoya died at a hospital from his injuries while the other victims were declared dead at the crash scene Saturday.

Witnesses told authorities that the balloon descended toward the ground around 7:30 a.m. Saturday and struck an overhead power line.

The gondola detached from the envelope and fell about 100 feet (30 meters) and crashed in the median of a busy city street before catching on fire, authorities said.

The envelope of the balloon floated away, eventually landing on a residential rooftop.

The National Transportation Safety Board and Federal Aviation Administration will be investigating the cause of the crash.

The NTSB sent two investigators to the scene and will look into the pilot, the balloon itself and the operating environment, according to agency spokesman Peter Knudson.

"This is a tragedy that is uniquely felt and hits uniquely hard at home here in Albuquerque and in the ballooning community," Albuquerque Mayor Tim Keller said.

According to an NTSB database, there have been 12 fatal hot air ballooning accidents in the United States since 2008 with two of those occurring in Rio Rancho just outside Albuquerque, which is mecca for hot air ballooning.

The city hosts a nine-day Balloon Festival in October that draws hundreds of thousands of spectators and pilots from around the world. It is one of the most photographed events globally.

Meleski was known for flying a multi-colored balloon with a Zia symbol which appears on the New Mexico state flag.

The retired UPS driver had been a licensed balloon pilot since 1994 and was a regular at the Balloon Fiesta.

Paul Fields, an Albuquerque resident who was friends with Meleski, said he was an amazing pilot who made every passenger smile.

"The skies will be a little less bright without him," Fields said.

Martin "Marty" Martinez retired from the Albuquerque Police Department as a patrol officer and had been a police field sergeant for Albuquerque Public Schools the past 16 years.

Some Albuquerque officers who responded to the crash had worked with Martinez and were sent home because it took a toll on them, police Chief Harold Medina said.