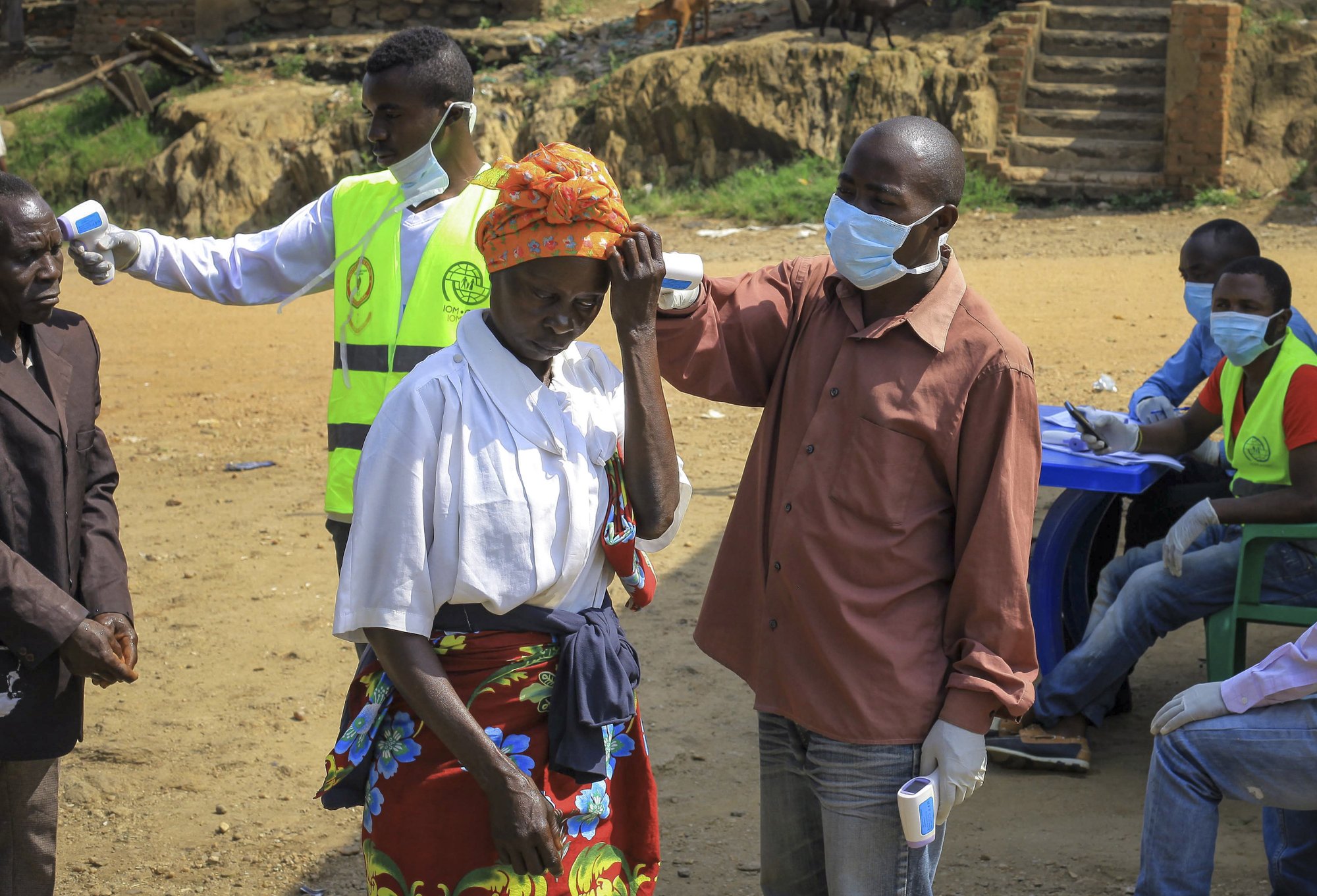 People crossing the border have their temperature taken to check for symptoms of Ebola, at the border crossing near Kasindi, eastern Congo Wednesday, June 12, 2019, just across from the Ugandan town of Bwera. (Photo: AP)

A 5-year-old boy vomiting blood became the first cross-border victim of Ebola in the current outbreak on Wednesday, while two more people in Uganda tested positive for the highly contagious disease that has killed nearly 1,400 in Congo.

The boy, part of a Congolese family who crossed into Uganda earlier in the week, died overnight, the World Health Organization said. Ugandan authorities said the two new cases are his 3-year-old brother and 50-year-old grandmother, who have been isolated at a hospital near the border. Uganda now has three confirmed Ebola cases.

Authorities tried to determine how the family, exposed to the virus via a sick relative in Congo, managed to cross a border where health officials have been screening millions of travelers for months.

This has become the second-deadliest Ebola outbreak in history since the first cases were declared in August. A WHO expert committee has been alerted for a possible meeting on whether to declare a global health emergency now that the outbreak has crossed the border, a spokesman said.

Experts have long feared Ebola could spread to neighboring countries because of rebel attacks and community resistance hampering virus containment work in eastern Congo, one of the world’s most turbulent regions. The virus can spread quickly via close contact with bodily fluids of those infected and can be fatal in up to 90% of cases.

Congo’s health ministry said a dozen members of the boy’s family had showed symptoms of Ebola. They were not placed in isolation and instead were told to remain where they were staying until transport was found to an Ebola treatment unit in Beni, Dr. Dominique Kabongo, coordinator of Ebola response teams in Kasindi, told The Associated Press.

Instead half of the family quietly crossed into Uganda, while five of those who remained have tested positive for Ebola since being taken to Beni, the health ministry said.

“Many people are evading (border) customs and using small footpaths and it is difficult for us to follow the contacts,” Kabongo said.

In Uganda, where authorities had been alerted by Congolese colleagues, the boy received treatment while relatives were isolated and tested. The boy’s uncle is now among seven suspected Ebola cases in Uganda, Health Minister Jane Aceng said, adding that authorities on both sides of the border would do their best to close unauthorized crossings.

Congolese officials were waiting to take sick patients back to Congo for treatment with their consent.

Ugandan health teams “are not panicking,” Henry Mwebesa, the national director of health services, told the AP. He cited the East African nation’s experience battling previous outbreaks of Ebola and other hemorrhagic fevers.

“We have all the contingencies to contain this case,” Mwebesa said. “It is not going to go beyond” the boy’s family. The child’s mother, who is married to a Ugandan, knew where to cross the border unofficially, he added.

In the border area where the family is thought to have crossed, surveillance teams patrolled the Ugandan side on Wednesday. Some footpaths, however, remained unguarded. Some people wade across the shallow Lubiriha River instead of using a bridge to avoid being stopped by officials.

The “stubbornness of Congolese here” is a challenge in screening, a Ugandan Red Cross official, Francis Tumwine, told the AP at one border crossing last week. “They have failed to understand that Ebola is there, they think that it is witchcraft which is killing them.”

A Congolese trader, Muhindo Kaongezekela, added: “We are not sure if there’s Ebola in Congo. In Congo, if they find you with a headache, they take you to the hospital and later say they died of Ebola.”

This is the first time this restive part of vast Congo, veteran of several Ebola outbreaks, has experienced the virus.

Uganda is more stable than eastern Congo, and for the first time an experimental but effective Ebola vaccine is being widely used, with more than 130,000 doses distributed. Uganda has vaccinated nearly 4,700 health workers, and WHO is shipping another 3,500 doses this week for health workers and contacts of those infected.

But Ebola has been especially feared in Uganda, where multiple outbreaks have occurred over the years. An outbreak in the north in 2000 infected 425 people and killed more than half of them.

The WHO expert committee has twice decided that the current outbreak, while of “deep concern,” is not yet a global health emergency . But international spread is one of the major criteria the United Nations agency considers before making a declaration. WHO has advised against travel restrictions.

The first cross-border case is “tragic but unfortunately not surprising,” said Dr. Jeremy Farrar with the Wellcome Trust, which funds Ebola vaccine research.

While Uganda is well-prepared, he added, “we can expect and should plan for more cases in (Congo) and neighboring countries. This epidemic is in a truly frightening phase and shows no sign of stopping anytime soon.”