WORLD 5 years after Superstorm Sandy, the lessons haven't sunk in

5 years after Superstorm Sandy, the lessons haven't sunk in

Five years after Superstorm Sandy was supposed to have taught the U.S. a lesson about the dangers of living along the coast, disaster planning experts say there is no place in America truly prepared for climate change and the tempests it could bring.

That is true even in New York and New Jersey, where cities and towns got slammed by deadly floodwaters that rose out of the Atlantic on the evening of Oct. 29, 2012.

While billions have been spent to repair the damage, protecting vulnerable infrastructure, people and property across the nation from the more extreme weather that climate change could bring is going to require investment on a staggering scale, easily costing hundreds of billions, perhaps trillions.

Some coastal protection projects are moving forward, but the most ambitious ideas spurred by Sandy’s onslaught are still in the design stage, with questions about whether they will ever be built.

Some wonder whether the nation has the will to undertake such ventures, even after this past season brought more catastrophic storms, including Hurricane Harvey, which swamped Houston, and Hurricane Maria, which laid waste to Puerto Rico’s electrical grid.

“It felt after Sandy as if we might have finally had our wake-up call. We’d start to take these things seriously,” said Eric Klinenberg, director of the Institute for Public Knowledge, a think tank at New York University. “We’d make the kind of investment in climate security that we made in homeland security after Sept. 11. But of course nothing of the sort has happened.”

“Since the new administration is not using the CC word, the climate change word, it’s very hard to instill this forward-looking kind of attitude where you have to take into account sea level rise and how the flood zones expand,” says Klaus Jacob, a Columbia University scientist specializing in climate change adaptation.

And yet, some planners still hope that Sandy created momentum for projects that could serve as national models.

After Sandy, which was blamed for at least 182 deaths in the U.S. and Caribbean and more than $71 billion in damage in this country alone, a government-funded competition called Rebuild by Design produced audacious ideas for defending the coast.

One concept, dubbed The Big U, would create 10 miles (16 kilometers) of floodwalls, berms and gates around lower Manhattan. Other ideas include erecting breakwaters around Staten Island that would double as oyster beds, and reconfiguring the Meadowlands, the polluted wetlands of urban New Jersey, with berms and marshes. 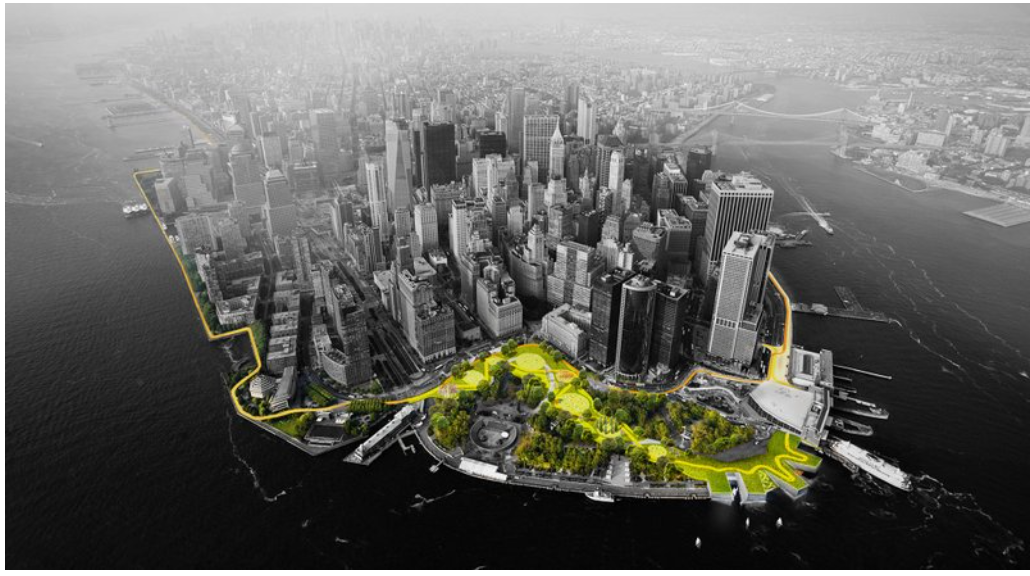 This illustration provided by Rebuild by Design in October 2017 shows a flood-mitigation design for the Manhattan borough of New York. The BIG U proposal calls for a 10-mile protective system around the low-lying southern part of the island. The proposal is part of the Rebuild by Design competition to create infrastructure that would protect coastal areas affected by Superstorm Sandy. (The BIG Team/Rebuild by Design via AP)

The U.S. Department of Housing and Urban Development put up $1 billion to get those projects started, but construction hasn’t begun on any of them.
Amy Chester, Rebuild By Design’s executive director, said it will take years to complete all the planning and gain government approvals and community support. And it’s not clear how much these projects will ultimately cost.
ONE CITY’S PLAN
LaTrenda Ross gets teary-eyed recalling the days after Sandy flooded the streets of Hoboken, New Jersey, a city of 50,000 people across the Hudson River from Manhattan that has been her home for 40 years.
“To not be able to go to work, to sit there in the dark, no elevators, no way out, was devastating,” she said. If something isn’t done to prevent a repeat, “there won’t even be a city of Hoboken. We might as well pack up and move now.”
New Jersey does, in fact, have a plan. Over the summer it hired an engineering firm to carry out one of the Rebuild by Design concepts: an anti-flood system for Hoboken. The $230 million project, funded by HUD, involves a series of floodwalls, pumping stations and water retention tanks.
Construction is due to start in 2019 and take at least three years. 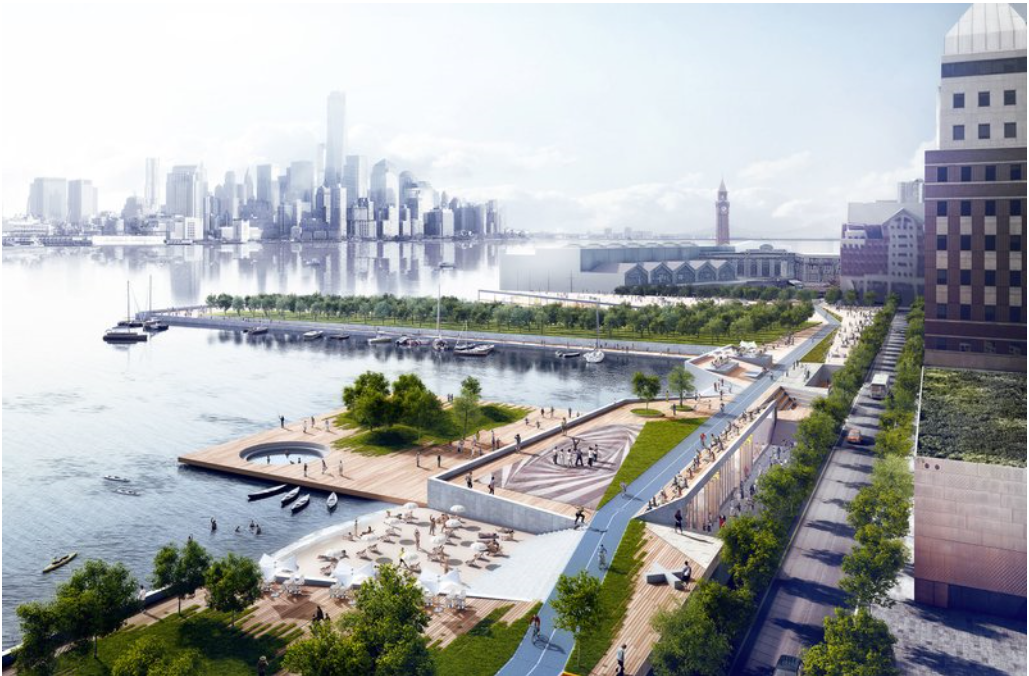 Hoboken Mayor Dawn Zimmer said the cost is worth it. Eighty percent of the city flooded during Sandy, she said, causing as much as $1 billion in damage. Buildings were ruined. Three of the city’s four fire stations flooded. A vital commuter train station was knocked out for months.
Laura Baird, an engineer who helped develop the plan, said had the system been in place when Sandy hit, 85 percent of the city would have been protected.
PROGRESS AND DOUBT
While the grandest ideas about post-Sandy protections are still far from reality, there has been progress .
Communities on the New Jersey shore built sand dunes to hold back surf, or fortified existing ones. Power companies and New York’s subway system have put flood protections around key infrastructure. Hospitals moved electrical equipment out of basements.
The Army Corps of Engineers is scheduled to begin construction in 2019 on a 5-mile-long (8-kilometer-long), 20-foot-high (6-meter-high) seawall and promenade that would run along New York’s Staten Island in front of the neighborhoods hit hardest by Sandy. The project, which is still being designed, has an estimated price tag of $600 million and is scheduled for completion by 2022. 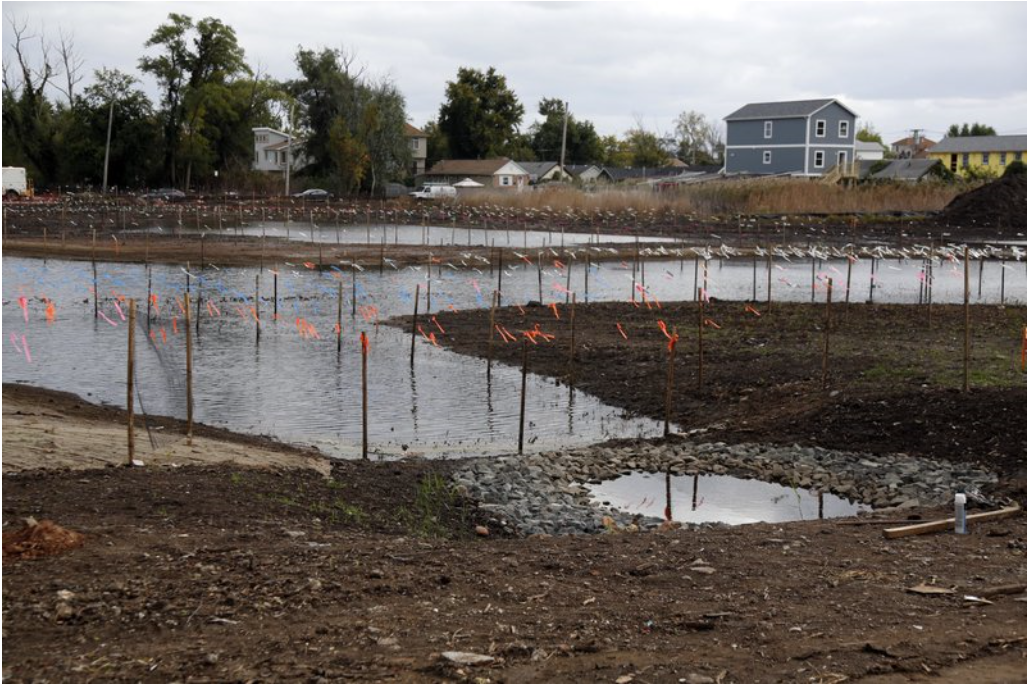 Construction continues on flood mitigation plans near homes in the Staten Island borough of New York on Thursday, Oct. 12, 2017. This corridor is part of what the city calls the “Mid-Island Bluebelt” that will contribute to better flood mitigation and storm water drainage. (AP Photo/Seth Wenig)

Michael Cappannari, a spokesman for the Federal Emergency Management Agency, said the administration is committed to helping communities recognize the risk and defend against flooding. He cited several federally funded projects underway, including construction of boardwalks with seawalls hidden beneath them and flood-proofing of sewage treatment systems.
It’s not enough, said Jacob, the Columbia scientist.
“It’s on a pace that’s dictated by the funds that are available, politically made available,” he said. “And if that snail’s pace continues, there’s a good chance that we may have another severe storm in town or in the region that will outpace that slow pace of improving the systems.”
Politicians locally and in Congress appear reluctant to get behind enormously expensive and sometimes divisive projects to deal with a threat that often feels hypothetical.
In Hoboken, for example, one proposal for a floodwall that would have protected more of the city was rejected because it would have blocked river views. Cities throughout the country have been reluctant to curtail building on the waterfront, because those spots are in such great demand from homebuyers.

In New York City, FEMA redrew the flood maps after Sandy, nearly doubling to 71,500 the number of buildings deemed to be in high-risk zones. The city objected for fear that would raise flood insurance rates and stifle waterfront development, and last year FEMA agreed to roll the flood zones back. 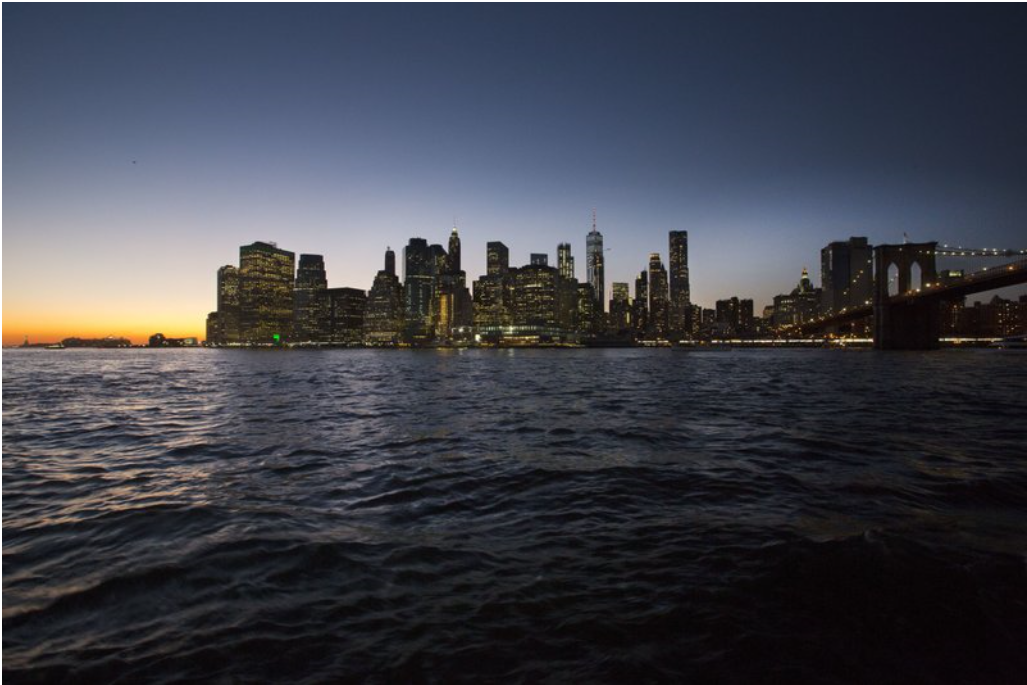 The sun sets behind the New York skyline and the Brooklyn Bridge, right, on Oct. 19, 2017. Five years after Superstorm Sandy was supposed to have taught the country a lesson about the dangers of living on an undefended coast, there’s still no city in America that’s truly prepared for the challenges of climate change and the storms it will deliver. (AP Photo/Mark Lennihan)

Bill Golden, president of the National Institute for Coastal and Harbor Infrastructure, said worrying about spending too much is shortsighted, and he blames the inaction on “a misunderstanding of the new reality that we face.”
A study released Monday by an international team of scientists predicted that between 2030 and 2045, New York City could experience storm surges of over 7.4 feet (2.25 meters) every five years, primarily because of sea level rise. That’s up from every 25 years in recent decades.
NO RETREAT
After Sandy, New York and New Jersey bought and emptied 1,250 homes in areas it deemed too difficult to protect from floods.
Patty Snyder, whose 53-year-old brother drowned when Sandy struck, was among the Staten Islanders who took a buyout. “I knew I was never going back, because I felt the city, state and federal governments never were going to do what needed to be done to stop future flooding,” she said.
But most people in the wrecked communities did return, whether because they were skeptical of the risk, confident about the planned Staten Island seawall, or simply unwilling to say goodbye to their homes.

Some homes were rebuilt on elevated foundations or pilings. Others were restored to the way they were before Sandy, leaving them just as vulnerable. 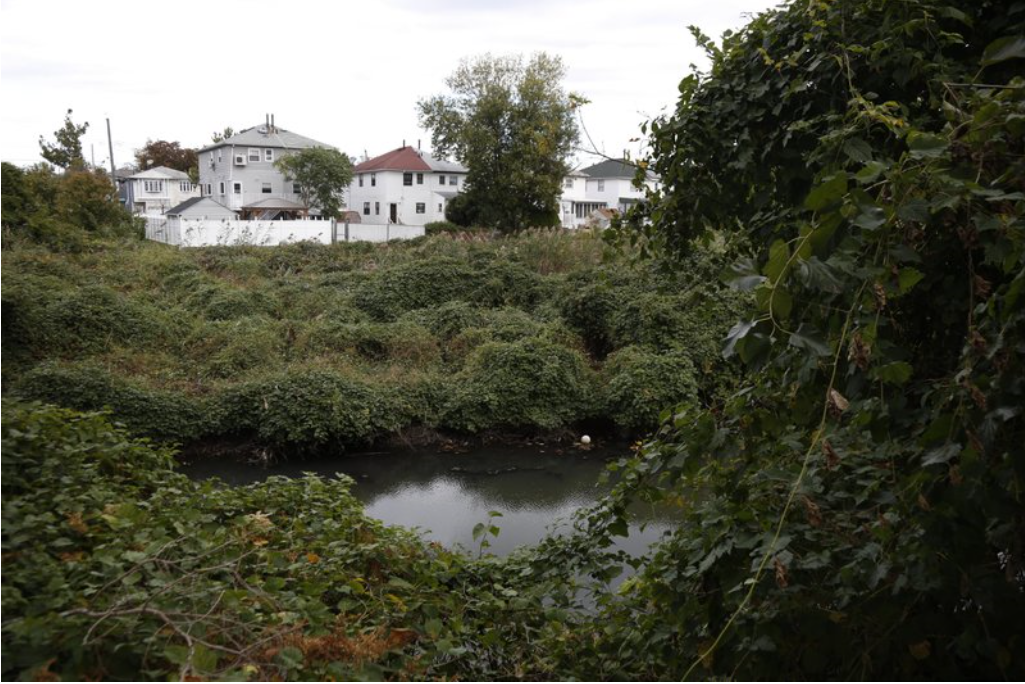 An undeveloped marshy area is seen near homes in a flood prone area in the Staten Island borough of New York, Thursday, Oct. 12, 2017. This area is part of what the city calls the “Mid-Island Bluebelt” that will contribute to better flood mitigation and storm water drainage. (AP Photo/Seth Wenig)

“I really don’t think it will happen again,” said Fred Steinfeld, a Staten Island resident whose basement filled with water during Sandy. “I just think that storms like that don’t happen that often.”
Dexter Dugan, whose Staten Island home got 9 feet of water, took steps to make it more storm-resistant, including putting heating and electrical systems on the second floor.
“You live near the water, it’s going to flood,” he said.