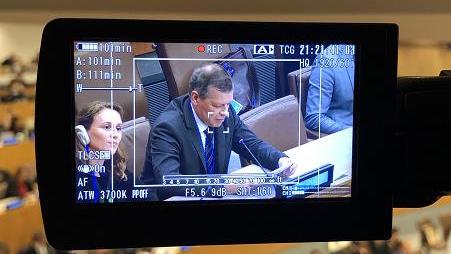 UNITED NATIONS, Oct. 29 (Xinhua) -- Up to 54 countries on Tuesday jointly voiced their support for China's counter-terrorism and de-radicalization measures in its Xinjiang Uygur Autonomous Region at a UN session.

Belarusian Permanent Representative to the United States Valentin Rybakov presented the statement on behalf of the 54 countries during a discussion on human rights at the Third Committee of the United Nations General Assembly, also known as the Social, Humanitarian, and Cultural Committee.

Noting China's people-centered development philosophy and remarkable development achievement, the statement spoke positively of the results of counter-terrorism and de-radicalization measures in Xinjiang.

These measures "have effectively safeguarded the basic human rights of people of all ethnic groups in Xinjiang," according to the statement delivered at the session.

The statement expressed opposition to relevant countries "politicizing the human rights issue" and called on them to stop baseless accusations against China.