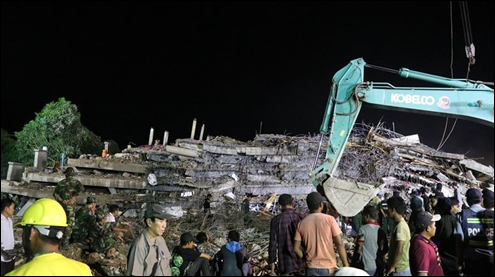 Six Cambodian workers died and 16 others injured after a six-floor guesthouse building, that was under construction, collapsed in southwestern Cambodia's Kep province on Friday, a provincial spokesman said on Saturday.

"Twenty-two people were pulled out of the debris of the collapsed building, but six of them had died," Kep Provincial Information Department director and spokesman Ros Udong told Xinhua, adding that the victims aged between 15 and 56 years old.

He said the rescue is still going on as witnesses reportedly said that between 20 and 30 people, including a foreman, were in the building when it collapsed.

The accident occurred at around 4:30 p.m. at an under-construction six-story building in Kep city, he said, adding that the building came down when workers were constructing the seventh floor slap.

Cambodian Prime Minister Samdech Techo Hun Sen visited the site on Friday night and led the rescue team to search for the workers who are still trapped under the collapsed building.

Excavators and crane trucks had been used to remove the debris of the collapsed building, and ambulances were on standby to carry victims, as relatives of the missing cried and prayed for their missing members.

"My two children, male and female, and a son-in-law are missing in the debris," Sar Hoeun told Xinhua tearfully while waiting at Friday night as rescuers searched through the rubble of the collapsed building.

"I pray for them to come out safely because they are my hope when I am old," said the 46-year-old mother.

She said her children came to work as construction workers at the site for four months.

Chhun Tith, head of the firefighting bureau in Kep province, said more than 1,000 rescuers, including Chinese, had taken part in the rescue operation.

He said Ek Sarun, the Cambodian owner of the collapsed building, was detained for questioning over the tragic incident.

An official at the Kep Provincial Land Management, Urban Planning and Construction said the building's owner had applied for a license to construct a five-story building, but he illegally built it up to seven floors.

"This is perhaps the main cause of the collapse," he said while visiting the collapsed building.

Located about 160 km southwest of capital Phnom Penh, the coastal province of Kep is an emerging tourist destination, and the tiny province is known for its seafood and tropical islands.