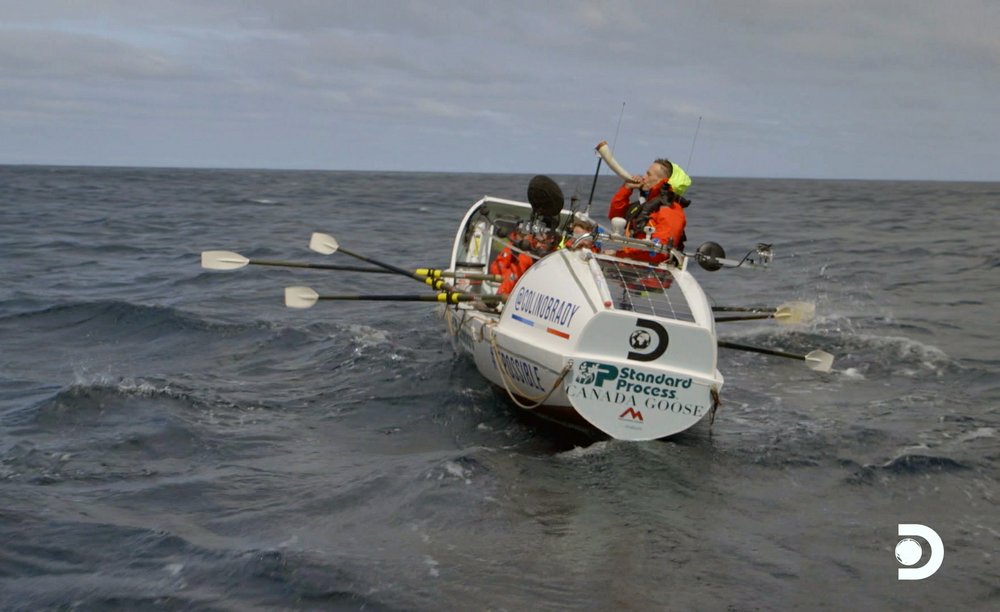 This image released by Discovery Channel shows Icelandic ocean rower Fiann Paul blowing a horn in a scene from “The Impossible Row," documenting endurance athlete Colin O’Brady and his crew's crossing of the treacherous icy waters of The Drake Passage by row boat. (Photo: AP)

As freezing water thrashed their rowboat in some of the most treacherous waters in the world, six men fought for 13 days to make history, becoming the first people to traverse the infamous Drake Passage with nothing other than sheer manpower.

They dodged icebergs, held their breaths as giant whales breached near their small boat and rode building-sized waves while rowing 24 hours a day toward Antarctica.

The team of men from four countries finished crossing the Drake Passage on Wednesday in just under two weeks after pushing off from the southern tip of South America.

“This is a really big deal in Antarctic history to hear about this,” said Wayne Ranney, a Flagstaff, Arizona-based geologist who has led expeditions to Antarctica and crossed the Drake Passage in motorized vessels more than 50 times. “One hundred percent of their progress was done with those 12 arms for 600 (nautical) miles. That’s just phenomenal. I can’t even imagine.”

Besides the threat to their lives, the men labored under grueling conditions. Their 29-foot (9-meter) rowboat, named the Ohana, had to be in constant motion to avoid capsizing. That meant three men would row for 90 minutes while the other three rested, still cold and wet.

“You’re rowing inside an open hold, 40-foot sea waves are splashing in your face, near-freezing water is splashing over the bow,” said 34-year-old Colin O’Brady of Jackson Hole, Wyoming, one of the six men on the boat.

“It was quite harrowing,” O’Brady told The Associated Press on Thursday in his first interview after the journey. “By the end, we all lost a good amount of weight and were delirious from the sleep deprivation.”

The men had to use a bucket to go to the bathroom. To rest, two men needed to lie shoulder to shoulder in a tiny space while a third would lay in a fetal position in an even smaller area.

“You’re curled up and jammed into a small space, trying to get a few winks of sleep before the alarm would go off and boom, you’re back at it again,” O’Brady said.

The toughest part for O’Brady’s fellow rower, Jamie Douglas-Hamilton of Edinburgh, Scotland, was the constant bombardment from the elements.

“We were hit by winds from every single direction ... and the seas down here are very violent — it’s the roughest ocean in the world,” the 38-year-old said. “We almost capsized many times, and the problem with that is the water is so cold that if you go in, you’ve probably got two to five minutes.”

Physically, Douglas-Hamilton said he fought crippling seasickness and numb hands and feet. At one point, a strap he had to wear around his ankles while rowing wore through his boots and cut into his skin all the way to the bone.

“It was absolute agony,” Douglas-Hamilton said.

The other men on the expedition were: Fiann Paul of Reykjavik, Iceland; Cameron Bellamy of Cape Town, South Africa; Andrew Towne of Grand Forks, North Dakota; and John Petersen of Oakland, California.

Paul, Douglas-Hamilton and Bellamy are record-breaking ocean rowers, Towne is a championship rower and has climbed the tallest mountain on every continent, and Petersen was a championship college rower.

In addition to storms and waves, the men dodged icebergs and whales that could easily have destroyed their small vessel. And then there were the mental challenges, especially during the night shift.

“At night we can’t see the waves as they roll and crash into us and we can’t see the horizon so there is no sense of progress,” O’Brady wrote on Instagram as he documented the journey. “It feels like being inside of a washing machine, blindfolded where time is standing still.”

Discovery documented the journey while following the men in a larger, motorized boat.

“There have been some frightening, intense moments when our boat — a 120-foot-long boat — was lurching forward and up and over these massive waves, to see the rowboat hidden for minutes at a time was rather unnerving,” Besaw said.

The row across the Drake Passage is just the latest adventure for O’Brady, who became the first person to traverse Antarctica alone without help last year.

A book about that journey is coming out on Jan. 14, 12 years to the day since O’Brady was severely burned in a fire in Thailand. After the fire, he said he was told he would never walk again.

He said that prognosis has helped fuel each new adventure.

“I am dreaming of what’s next,” O’Brady said. “To be determined, but I don’t think my expedition life is over.”

For Douglas-Hamilton, the journey across the Drake Passage might be his last time setting a record, and he’s content with that.

“I would rank this as the toughest challenge any of us has ever done,” he said. “This was such a good one, I’d be happy leaving it at this. The memories from this one will last forever.”