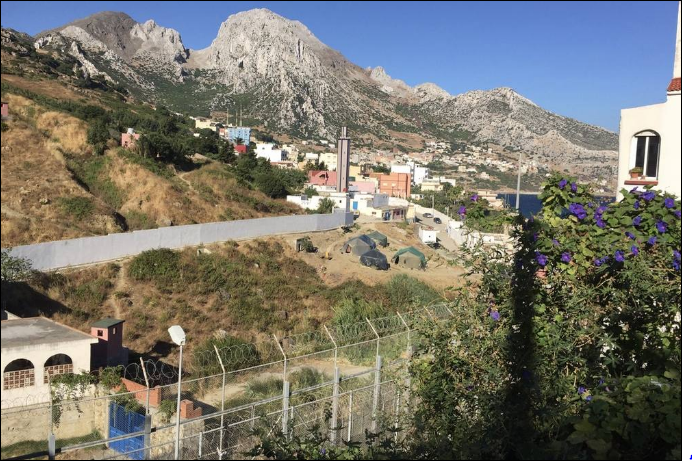 View from Spain's Ceuta across the fence to Morocco. (Photo: CGTN)

Throughout the night, he said, Civil Guards on watch along the fence, which stretches eight kilometers (five miles) around the Ceuta enclave on Morocco’s north coast, had observed small groups of migrants moving near the fence on the Moroccan side.

Then, suddenly, at first light, they converged on one section, in what Cruzado and other Spanish officials called a highly coordinated assault.

It would turn out to be the biggest border breaching since February 2017, and this time, it was not just a matter of the migrants going up and over the parallel six-meter tall (nearly 20 feet) fences, topped with razor wire.

Cruzado said it takes healthy migrant men an average of about seven minutes to scale the first fence, come down between the two, and then get up over the next one.

The Civil Guard response is timed to be quicker than that, to rush in reinforcements and prevent the migrants from getting over the second fence into Spanish, and European, territory.

But this time, authorities saw new tactics. Juan Hernandez, a top aide to the Spanish government’s chief official in Ceuta, told CGTN, “It wasn’t a typical assault, it was done differently. They even used machinery, electric saws, to cut through some sections of the fence.”

How they managed to obtain the battery-powered saws in Morocco was under review, Spanish authorities said. It meant that some were going up and over the fence and others were coming through it.

Then, as Civil Guards moved in, they were met with yet another new tactic. “It’s clear this assault had a large degree of pre-meditated violence,” spokesman Cruzado said.

CGTN’s crew was the only international media present at Ceuta’s migrant center, where the newly-arrived waited some hours to be checked in.

The center, with a capacity for 500, was already overflowing before those additional 600 migrants arrived all at once.

Tents were erected as temporary housing. After each migrant received a medical and police review, they got showers and meals. Then it was time to consider their next move to the European mainland across the Strait of Gibraltar from Ceuta.