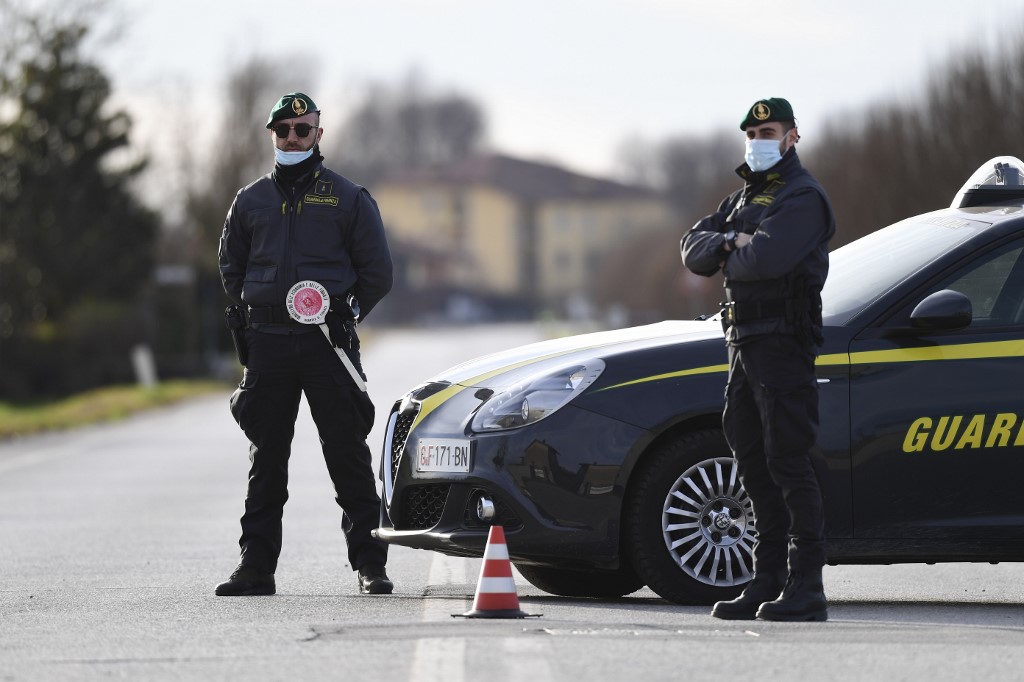 Green Berets from the Italian Finance guard (Guardia di Finanza) officers patrol by a check-point at one of the entrance of the small town of San Fiorano southeast of Milan, on February 26, 2020, situated in the red zone of the COVID-19 the novel coronavirus outbreak in northern Italy. (Photo: AFP)

A total of 650 coronavirus cases have been confirmed in Italy, an increase by 122 cases compared to the previous count provided by authorities at midday Thursday.

Fatalities linked to the infection rose to 17, after three more people died in northern Lombardy region, according to the authorities.

"All three were in their 80s -- and specifically two people aged 88 and one aged 82 -- and all had a delicate and critical clinical picture," Angelo Borrelli, chief of the Civil Protection Department and extraordinary commissioner for the coronavirus emergency, told a press conference at 6 p.m. local time.

"I would like to stress again also the positive news related to the number of infected people who have recovered, which has further increased to 40 in Lombardy," Borrelli explained.

In the morning, the official had confirmed 37 cases of recovery in the same region, which is the most affected together with northeast Veneto.

"Adding them to those already mentioned -- two people in Sicily and three in Lazio (around Rome), we have 45 people cured," Borrelli specified.

Italian authorities on Thursday tried hard to reassure about the situation and the full transparency of information provided daily.

Both Borrelli and Foreign Affairs Minister Luigi Di Maio warned against exaggerating the situation, stressing that there was no need to panic or to suggest avoiding a visit in the country.

All cases of infection in the country were traced down to the only two hotbeds of infection identified, both in the north, Di Maio said while addressing a press conference at the Foreign Press Association in Rome.

"The outbreaks concerned a few municipalities in the Lodi areas (Lombardy), and one municipality in Veneto," he said.

A need to "rein in" fears and face the situation more calmly was felt among some Italians in the streets as well.

According to 27-year-old student Carlo Caboni, the containment measures activated in northern Italy "will surely be useful to contain the epidemic, and there should be (now) more measures against virus panic."

"At the end of the day, this is a relatively manageable virus, there is no need to get alarmed and implementing closures," Filippo Franze, a lawyer, told Xinhua.

Micaela Russo, a 30-year-old tourism professional, agreed that it was important "to contain panic and phobia, and help citizens understand that the coronavirus is not the end of the world."

Russo confirmed Italy's tourism sector was already suffering the impact of the fears around the epidemic, and she worried about further "economic, social and health damages to the country."

Also on Thursday, researchers at the Sacco University Hospital in Milan announced they were able to isolate the Italian strain of coronavirus, according to Ansa news agency.

The discovery was made by a team led by professor Claudia Balotta, according to Sacco's Biomedical and Clinical Sciences Department director Massimo Galli.