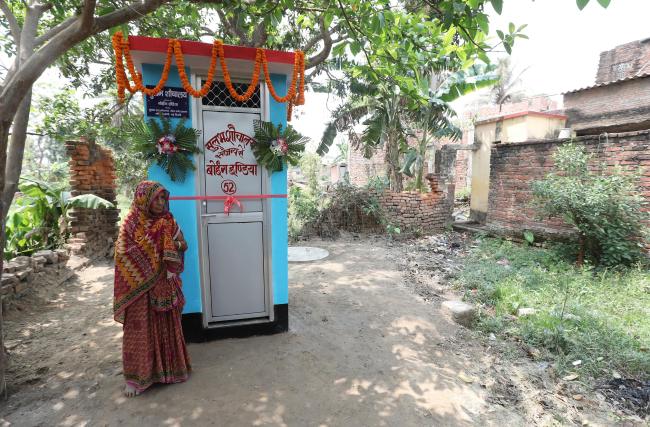 An elderly Indian woman stands in front of a newly built toilet outside her house in Sarisab Pahi village, Bihar, India on April 8, 2018. (Photo: File)

A seven-year-old Indian girl tried to have her father arrested after he failed to build a toilet at home as he promised, local police said on Wednesday.

Living with her parents in the town of Ambur in the southern state of Tamil Nadu, Hanifa Zaara did not want to defecate in the open and asked her father to build a toilet in her house.

"I was shamed to go outside and I felt bad when people looked at me," Zaara told BBC.

Her father told her he would build a toilet if the girl could top her class, but so far no toilet has been built, Zaara said in her letter to the police.

"I have been topping my class since nursery," she wrote.

"I am in the second grade now. And he is still only saying he will do it. This is a form of cheating, so please arrest him," she wrote.

If not, the girl continued, she wanted the police to at least force her father to write a signed letter saying by when he would get her the toilet.

The father said he had actually started building the toilet, but lacked money to complete it as he was unemployed, according to BBC.

"The girl was adamant on having her father arrested as she felt cheated," a local police officer told Reuters via phone.

"We then rang up her father, called him to the police station and made them shake hands and compromise," the officer said.

Toilets are the much talked about subject these days in India, as the country with a billion-plus population lacks proper sanitation and cleanliness.

Under a "Clean India Mission" that started in 2014, the Indian government vowed to build 100 million toilets across the country in five years. It also promised to improve the health, safety and dignity of hundreds of millions of Indians.