At least 71 homes have been destroyed in a bushfire raging out of control near Australia's fourth-biggest city Perth, authorities said Wednesday, as they told residents to ignore a coronavirus lockdown and leave threatened areas. 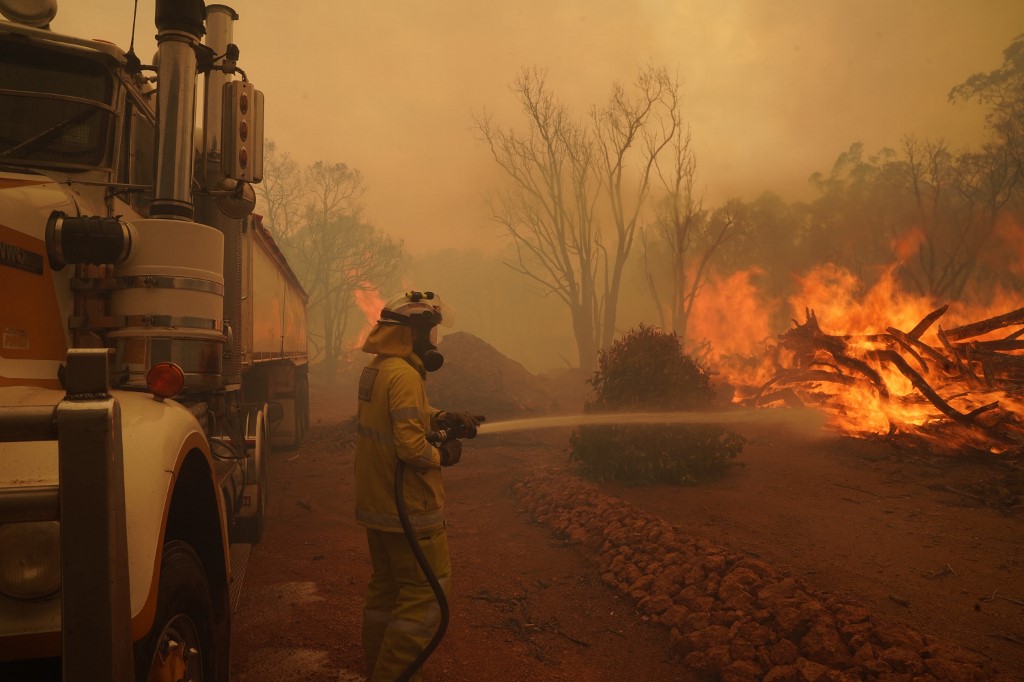 The blaze has torn through swathes of land in the Perth Hills and was moving towards more densely populated areas.

Six firefighters received minor injuries -- including one who officials said suffered burns and continued working to extinguish the blaze -- but no deaths or serious injuries have been reported so far.

"To the people who have lost their homes, it's just devastating for them. Our thoughts go out to them," Western Australian fire commissioner Darren Klemm said.

The blaze hit a population that had just been forced into a snap lockdown after a coronavirus case was detected. About two million people in and around Perth fell under the stay-at-home orders imposed on Sunday.

"This is a situation the likes of which we have never seen before," said Western Australian Premier Mark McGowan.

"A full lockdown and raging bushfires. It is frighting and it will test us all."

No new virus cases have been detected since the lockdown began, but the number of homes lost is still expected to rise slightly.

As the fire front edged nearer to more populated areas, Klemm called on locals to act swiftly to escape the potentially deadly blaze despite the coronavirus restrictions.

"What we don't want is indecision from people about whether they should evacuate or not when we require them to evacuate," he said.

"So that evacuation overrides any quarantining requirements that people may have."

Hundreds of people have fled the area since the bushfire was sparked on Monday, with many sleeping in evacuation centres overnight.

Among them was Peter Lavis, 68, who left two nights ago after watching distant smoke quickly transform the landscape until it "looked like a bomb had gone off".

"We could see the fire clearly, the red glow and occasional rush of flames going up," he told AFP.

"We had a little family conference and decided the best thing to do was to leave."

Lavis said he believed his home was safe while a neighbour had reported his eldest daughter's nearby house was also standing despite everything around it being burned.

"It's some of the best news but also the saddest -- a lot of people haven't been so lucky," he said.

Bushfire smoke has blanketed Perth, about 30 kilometres west of the blaze which had a 75-kilometre (47-mile) perimeter Tuesday and has so far burned almost 10,000 hectares (24,700 acres).

"It was just scorched earth. Even where I was behind the fire, there was a lot of active burning because the crews just had to react so fast," local mayor Kevin Bailey told public broadcaster ABC.

Temperatures were forecast to peak at 35 degrees Celsius (95 degrees Fahrenheit) on Wednesday before a predicted ex-tropical cyclone could bring rain and cooler temperatures but more unpredictable winds later this week.

Milder conditions overnight Tuesday had allowed firefighters to build containment lines in some areas, but Klemm cautioned there were "challenging times ahead".

More than 200 firefighters are battling the bushfire supported by water-bombing aircraft.

More than 3.5 million hectares were burned across Western Australia during the country's devastating 2019-2020 climate change-fuelled bushfires but the state was largely spared the loss of properties and lives seen in Australia's more densely populated southeast.

Scientists said the layout of the Perth Hills left it particularly vulnerable to blazes made increasingly more dangerous by climate change, with large fires engulfing homes in the area four times since 2009.