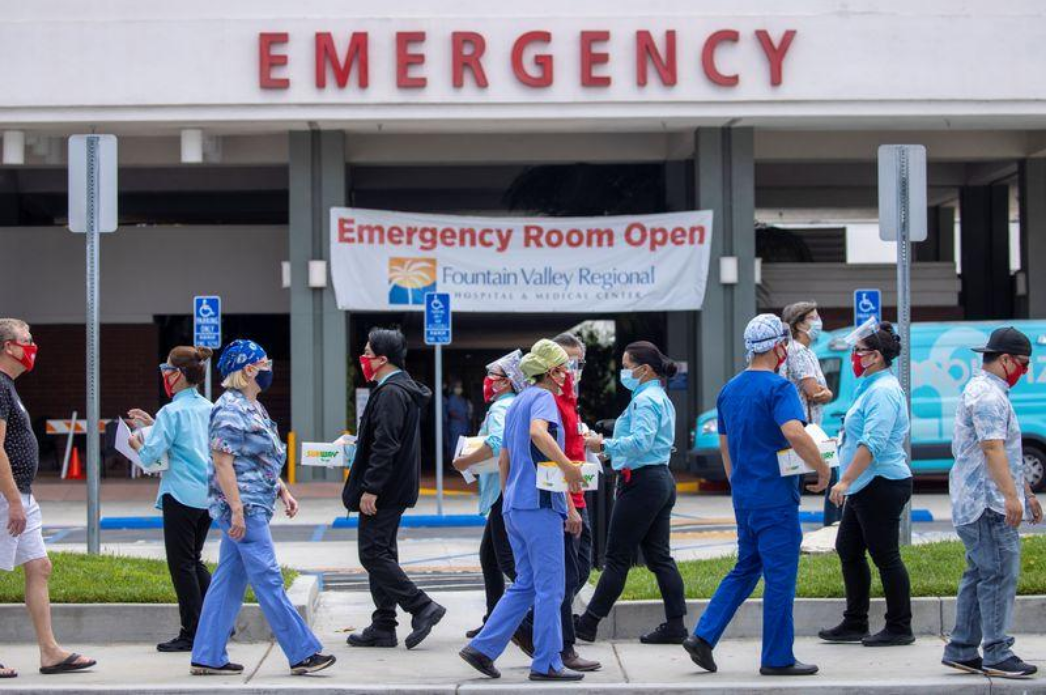 Healthcare workers hold a rally outside their hospital for safer working conditions during the pandemic, in Fountain Valley, California, U.S., August 6, 2020. (Photo: Agencies)

Numerous inmates in Texas federal prison are fearing for their lives as coronavirus has been spreading around every corner of the jail. Nearly 75 percent of inmates have tested positive for the virus, according to data from the federal Bureau of Prisons.

Outside the prison, one out of every 66 Americans have infected as the coronavirus cases have topped five million, with more than 160,000 deaths, nearly a quarter of the world's total.

Among the five million infected Americans, more than 338,000 children tested positive as of the end of July and more than 25 children died in July alone, according to the American Academy of Pediatrics.

Since the infection rate is far to achieve a herd immunity in the country, and the federal government has done little to curb the spreading, it seems that President Donald Trump's recent moves like urging children to go back to school and pushing for economy reopening, will make the number of coronavirus cases surge continuously in the foreseeable future.

CNN reported on Saturday that the Federal Correctional Institution, Seagoville, a low-security United States federal prison for male inmates, has been overwhelmed by COVID-19 cases. Over 1,300 of the roughly 1,750 prisoners at the Seagoville prison and camp have tested positive for the virus, a stunning infection rate.

Five inmates in the prison told CNN via phone that the virus has rushed through all cells, and they feared for their lives as it's impossible for them to keep social distance and wear face masks in the prison. Besides, many of them have been rejected by police officers to transfer them to home confinement.

An inmate named Joseph Perrone said to CNN that most of the guards in the prison didn't wear a face mask and they didn't ask inmates to wear one, either. The infected inmate works in the prison's food service and he was sure he had infected other people.

Another infected inmate named George Reagan said to CNN that his roommate tested positive in late June, but as Reagan tested negative twice, so the prison didn't isolate him from the other inmates. Then, he lost his sense of taste and tested positive in early July.

Reagan's wife has organized several protests in front of the prison in recent months. She said she was "100 percent" sure the federal government doesn't care these inmates at all and failed to take proper measures to tackle the coronavirus in early stages. She was also confused why prison officials rejected her husband's bid for home confinement, considering he has heart disease and has a good conduct in the prison.

During the pandemic, federal inmates have two paths to early release by asking for a home confinement or a compassionate release. So far, 7,444 inmates nationwide have been granted to home confinement, including several high-profile inmates like former Trump campaign manager Paul Manafort, former Trump lawyer Michael Cohen and the rapper Tekashi 6ix9ine. And roughly 900 additional inmates have been released through the second track.

However, legal experts say that is a drop in the bucket as there are more than 157,000 total inmates in the federal system and numerous are elderly and medically vulnerable people.

Home confinement is granted based on factors like age, risks to COVID-19, the seriousness of their offense and their conduct in prison. And inmates with health issues can ask a judge to reduce their sentence or ask their warden to represent themselves to ask judge for an early release.

Dr. Homer Venters, the former chief medical officer for New York City's jail system, warned that outbreaks at Seagoville and other prisons were like "popcorn kernels popping off over an extended period of time." He predicted that there are many many facilities either have gone through this or will go through the outbreaks.

"This is really a tragic situation that's playing out all over the country," he said to CNN.