WORLD 8 hurt, 2 in custody after school shooting outside Denver

8 hurt, 2 in custody after school shooting outside Denver 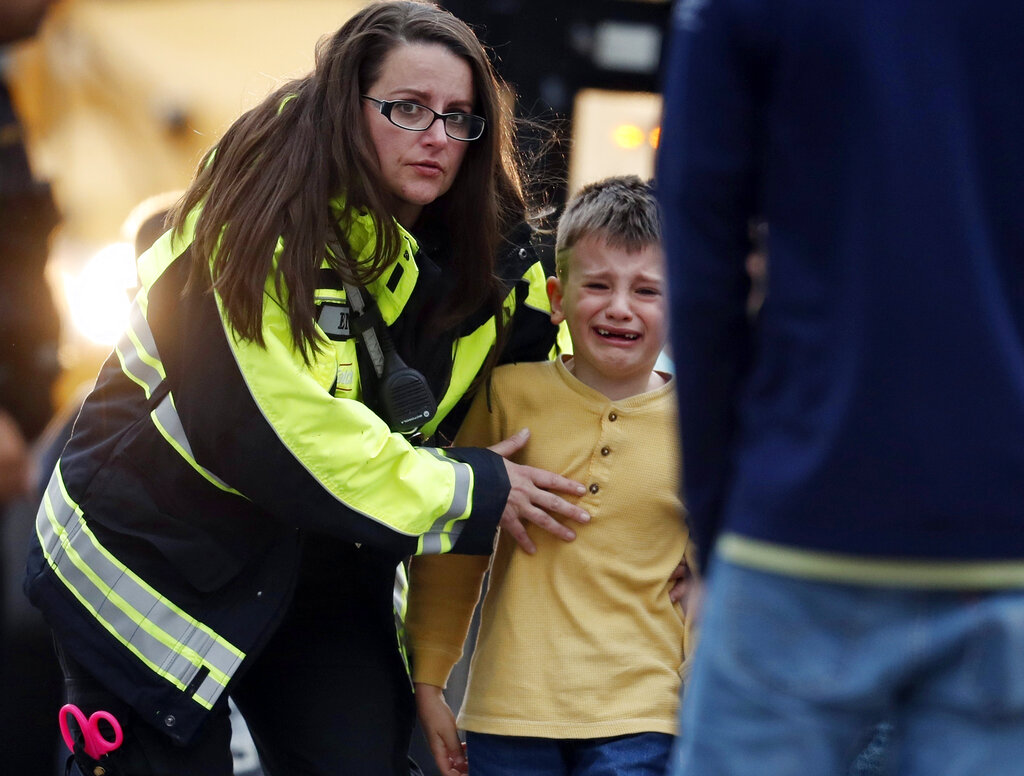 Officials guide students off a bus and into a recreation center where they were reunited with their parents after a shooting at a suburban Denver middle school Tuesday, May 7, 2019, in Highlands Ranch, Colo. (Photo: AP)

Two students opened fire Tuesday inside a charter school in an affluent suburban Denver community not far from Columbine High School, wounding eight teenagers and spreading minutes of terror before they were taken into custody with no injuries, authorities said.

Douglas County Sheriff Tony Spurlock said the pair walked into the STEM School Highlands Ranch and began shooting students in two classrooms. Within minutes, deputies at a nearby sheriff's department substation entered the school and arrested the two suspects after a struggle.

"As officers were arriving at the school, they could still hear gunshots," Douglas County Undersheriff Holly Nicholson-Kluth said.

"I have to believe that the quick response of the officers that got inside that school helped save lives," Spurlock said. He did not identify the suspects, but said they are an adult and a minor who were not previously known to authorities. Authorities planned to search their homes and a vehicle at the school, he said.

The STEM School Highlands Ranch is a public charter school with more than 1,850 students in kindergarten through 12th grades, The Highlands Ranch community of about 96,000 people is about 15 miles (24 kilometers) south of Denver.

The shooting comes nearly three weeks after neighboring Littleton marked the grim 20th anniversary of the Columbine school massacre that killed 13 people. The two schools are separated by about 7 miles (11 kilometers) in adjacent communities south of Denver.

Student Christian Paulson told television station KMGH that he was in study hall when he saw kids running and shouting, "School shooter!"

"And I'm like, what? Is this real or fake? And then I just went after them," Christian Paulson said. "And apparently, this is all real. And I tried to run with my life, but I'm out of breath."

Rocco DeChalk, who lives near the school, told television station KUSA that he saw so many students running past his house that at first he thought it was a gym class. He went outside and saw a teenage boy who had been shot in the back being helped by a teacher and another student.

They brought the boy into his kitchen and alerted a police officer, who sent for an ambulance.

"He made a comment, 'Oh, I'm starting to feel it now,'" DeChalk said. "I told him that was probably the adrenaline kicking in and he was going into shock."

Three area hospitals reported treating eight people in connection with the attack. Two were listed in serious condition, two were listed as stable, one was in good condition and three were released.

Lines of firetrucks, ambulances and law enforcement vehicles from multiple agencies were at the school, and medical helicopters landed on a grassy field.

The sheriff's office directed parents to a nearby recreational center to pick up their children. A fleet of school buses arrived and dropped off students, some of whom were crying and holding hands with their classmates as they were helped off. An ambulance also pulled up and let out a half-dozen children, none of whom appeared to be physically injured.

"We know this is a very worrisome situation for parents," Nicholson-Kluth said. "Relatives are worried, and we are trying to get them back together as soon as possible."

Gov. Jared Polis said in a statement that he was making state public-safety resources available to help secure the site and evacuate students.

"The heart of all Colorado is with the victims and their families," he said.

"It is not enough to send thoughts and prayers. It is empty. It is weak, and it does an injustice to our children who are on the front lines of this violence," he said.