DAMASCUS, March 24 (Xinhua) -- A total of eight people who were kidnapped by the rebels in the capital Damascus' Eastern Ghouta were set free on Saturday under a fresh agreement with the government, according to Xinhua reporter at the site. 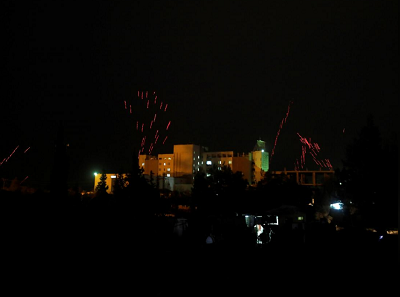 The the abductees were brought to the government-controlled area in the Panorama area on the outskirts of the town of Arbeen in Eastern Ghouta in ambulances.

They are the first batch of people to be released from rebels' captivity under a deal reached a day earlier between the Syrian government and the rebels of Failaq al-Rahman in Eastern Ghouta.

A Syrian officer in the Panorama area told Xinhua that more abductees are expected to be freed soon.

A day earlier, an agreement was reached for the evacuation of rebels and their families from new areas in Eastern Ghouta countryside.

As many as 7,000 rebels and their family members will leave areas of Jobar, Zamalka, Arbeen, and Ayn Tarma in Eastern Ghouta, and the deal covers the main rebel groups in control of those areas, namely the Failaq al-Rahman, and the al-Qaida-linked Nusra Front.

The agreement, which was mediated by the Russians, will also see the release of kidnapped people by the rebels ahead of their evacuation and lists of names were handed over to the Russian side, the report said.

The evacuation was initially planned to take place at 9:30 a.m. (0730 GMT) Saturday after the rebels hand over maps of the tunnels they dug and mines they planted in the aforementioned areas, but the process took longer than expected.

Earlier on Saturday, a total of 15 buses started entering the Arbeen town to transfer the first batch of rebels.