Around 30 people still remained missing in the wake of the temblor, with almost 2,000 people taking refuge in emergency evacuation shelters that have been set up at more than 400 locations, local authorities said.

The powerful temblor with a preliminary magnitude of 6.7, which measured the maximum 7 on Japan's seismic intensity scale, rocked Japan's northernmost prefecture at 3:08 a.m. local time on Thursday and the death toll is likely to rise, officials said, as multiple houses were buried by landslides.

Complicating rescue efforts, Hokkaido Electric Power Company said that power was out across the whole of Japan's northernmost prefecture and 2.95 million homes were without electricity.

The utility said it might take up to a week to fully restore power in its service area.

In addition, hundreds of thousands of households were reported as having no water supply, local utilities also said.

All flights have been cancelled at Hokkaido's New Chitose Airport and trains, including Shinkansen bullet train services, bus and highway services have been suspended, local operators said.

At the airport, part of the ceiling collapsed in a terminal building due to the quake and a water leak and the power outage also forced the airport's closure, the Transport Ministry said.

The closure has resulted in more than 200 flights being canceled, which has affected around 40,000 passengers. Due to the power outage, the airport's operator said it was not sure when the airport could be reopened.

Local police said they had received hundreds of reports of injuries as a result of the quake, and in the towns of Atsuma and Abira, 20 houses were leveled after landslides engulfed wide regions of the area.

More than 1,300 public schools in the prefecture were forced to close and students told to stay at home amid continuous aftershocks, according to local reports, citing the education ministry and the Sapporo government.

A potentially lethal fire broke out at a petrochemical complex in Muroran, local media reported, but was later extinguished by firefighters.

The Japanese government has set up a liaison unit at the crisis management center of the offices of Prime Minister Shinzo Abe to gather more information on the devastating quake. 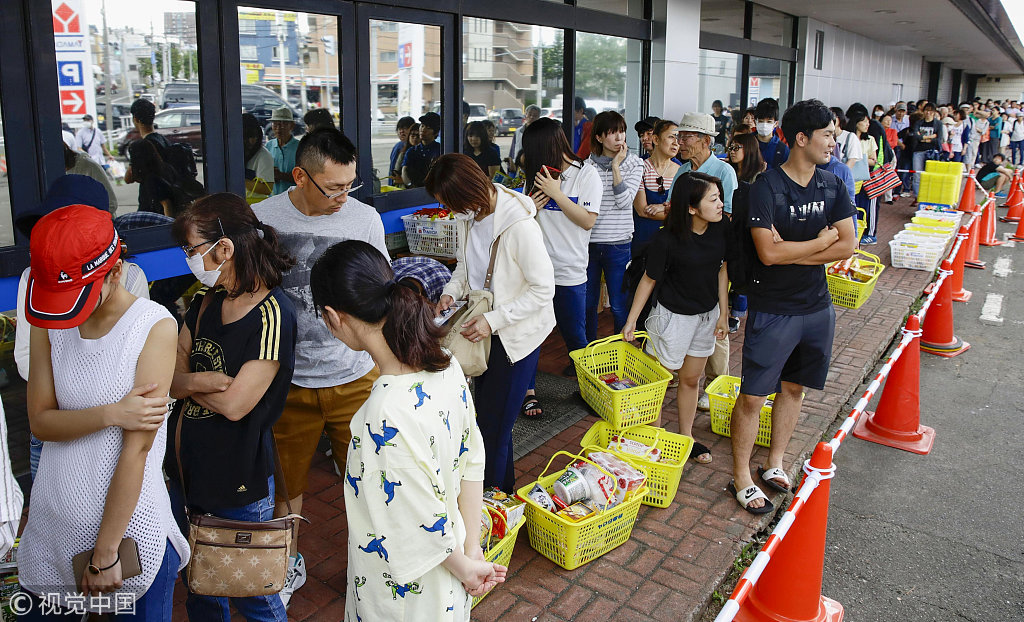 People line up to buy foods outside a store after an earthquake hit the area in Sapporo, Hokkaido, northern Japan, September 6, 2018. (Photo: VCG)

Around 25,000 personnel from the Japanese Self-Defense Forces have been dispatched to the quake-stricken areas to assist with rescue and relief operations at the request of the governor of Hokkaido.

According to the Japan Meteorological Agency (JMA), the major temblor occurred in southern Hokkaido at 3:08 a.m. local time on Thursday morning (1808 GMT Wednesday), with the epicenter located at a latitude of 42.7 degrees north and a longitude of 142.0 degrees east and at depth of 40 km.

The earthquake measured the maximum 7 on Japan's seismic intensity scale, marking the first time a quake in Hokkaido has reached this intensity level since the seismic scale was revised in 1996, the JMA noted.

Dozens of aftershocks followed, including one with a preliminary magnitude of 5.4 that hit the prefecture at 6:11 a.m. local time (2111 GMT Wednesday), the weather agency said.

The JMA has warned that earthquakes with a similar intensity could continue in the area for about a week.

Japan's Nuclear Regulation Authority said that the Tomari nuclear power plant operated by Hokkaido Electric Power Co. had lost an external power source, and a spent fuel pool was being cooled by an emergency power supply system. Power supply has since been restored at the plant, according to the plant's operator.

The nuclear watchdog said no abnormalities have been observed in radiation levels around the plant and Tohoku Electric Power Co. has said that the Higashidori nuclear power plant in Aomori Prefecture south of Hokkaido has exhibited no problems.

The JMA said there might be a slight sea-level change in Japan's coastal areas as a result of the early morning temblor, but no official tsunami warning has been issued.