XinhuaISLAMABAD, July 3 (Xinhua) -- At least nine people were killed and 10 others injured in separa 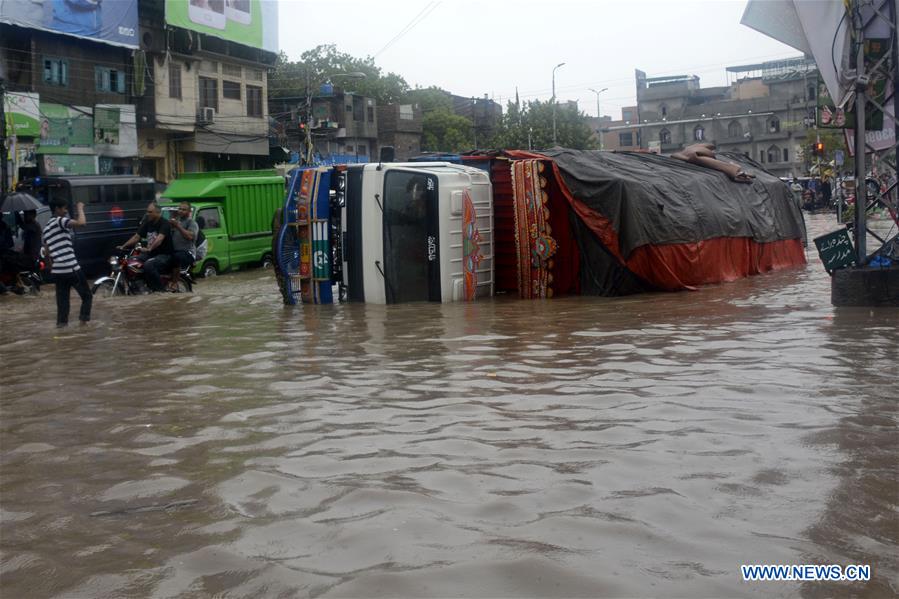 An overturned truck is seen on a flooded road in eastern Pakistan's Lahore, on July 3, 2018. At least nine people were killed and 10 others injured in separate rain-related accidents in Pakistan's eastern city of Lahore on Tuesday, local media reported. (Photo: Xinhua)

At least nine people were killed and 10 others injured in separate rain-related accidents in Pakistan's eastern city of Lahore on Tuesday, local media reported.

Separately, the roof of a dilapidated house collapsed in the Johar Town area of the city due to heavy rains, injuring six people living inside.

They were shifted to a nearby hospital where three of them were pronounced dead and the others are said to be in critical condition.

Emergency has been declared by the authorities in the city after hours-long heavy rain wreaked havoc in different areas of the city.

The city is also observing a blackout as over 200 electricity feeders tripped due to the rain. It has recorded 252 mm rain in Lahore, breaking the record of past 38 years.

Rainfall also disrupted flight operations at Allama Iqbal International Airport in Lahore, said airport officials, adding that four international flights which were scheduled to land at the airport got delayed and another flight from Saudi Arabia was diverted to the eastern Multan city.

According to the Pakistan's weather department, rains in Lahore will continue for the next three more days.

Caretaker chief minister of Punjab Hasan Askari expressed grief over the loss of lives and asked the authorities concerned to provide best available medical treatment to the injured as well as to increase the rescue efforts in the affected areas.