WORLD A century after fighting for Paris, leaders mark armistice

A century after fighting for Paris, leaders mark armistice 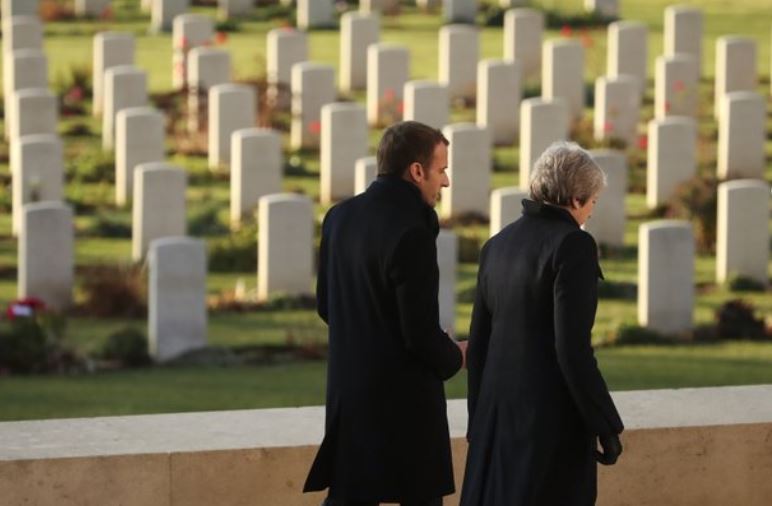 Paris, the City of Light, always was the grandest prize of World War I, either to conquer or defend.

So it is only fitting that when victors and vanquished meet to mark the centennial of the armistice this weekend, the biggest ceremony should be on the famed Champs-Elysees at the Arc de Triomphe.

On Friday, some leaders began remembrance events in a wide crescent of cemeteries and trench-rutted battlefields north of the capital.

British Prime Minister Theresa May laid wreaths for the first and last British soldier killed in the fighting — the two were buried across one another near Mons in southern Belgium. One grave holds the remains of Pvt. John Parr, killed Aug. 21, 1914. The other grave is of Pvt. George Ellison, who survived some of the war’s worst battles but was shot on Nov. 11, 1918 — the war’s last day.

French President Emmanuel Macron continued his pilgrimage of WWI sites and caught up with May, as the two present day leaders of the Allied forces that defeated Germany walked past graves at the Thiepval memorial.

“Each cemetery and memorial across the world is a unique and poignant reminder of the cost of the First World War,” said May.

Sixty-nine heads of state and government will underscore that message at the Tomb of the Unknown Soldier in Paris on the 11th hour of the 11th day of the 11th month on Sunday, exactly a century after the armistice.

Such was the symbolic importance of the French capital that victorious US Gen. John J. Pershing said it was his “desire that every man in the American Expeditionary Forces should be given the opportunity to visit Paris before returning to the United States.”

Far from every surviving US soldier from the 1914-1918 war made it to the French capital, but on Sunday, President Donald Trump will join his French counterpart and host, Emmanuel Macron, and others to remember the millions who died during the first global conflict.

Alan Seeger, the American poet that Macron lauded in his speech to the US Congress last year, already captured the seeds of reconciliation in 1916 when he wrote, as a soldier in the French Foreign Legion, that “I never took arms out of any hatred against Germany or the Germans, but purely out of love for France.”

France, Britain and its empire, Russia and the United States had the main armies opposing a German-led coalition that also included the Austro-Hungarian and Ottoman empires. Nearly 10 million soldiers died, often in brutal trench warfare where poison gas added a cruelty in warfare that the world had never seen.

Hundreds of thousands from all corners of the world died in Europe, many of them on the Western Front reaching from Belgium’s Flanders Fields almost up to the Swiss border.

Carrying the heritage of defeated Germany, Chancellor Angela Merkel will be visiting the site in the woods north of Paris where military leaders agreed in a train carriage to the armistice at 5 a.m. on Nov. 11, 1918, six hours before it took effect.

On Sunday, in another show of reconciliation, Merkel will open an international peace forum in Paris with Macron and U.N. Secretary-General Antonio Guterres.

Like other leaders visiting national cemeteries dotted around northern France, Trump will visit two burial sites that highlight how the United States came of age as a military power after it joined the war in 1917 and set it up to become a dominating force for the next century.