WORLD A look at France’s heated debate over pensions

A look at France’s heated debate over pensions 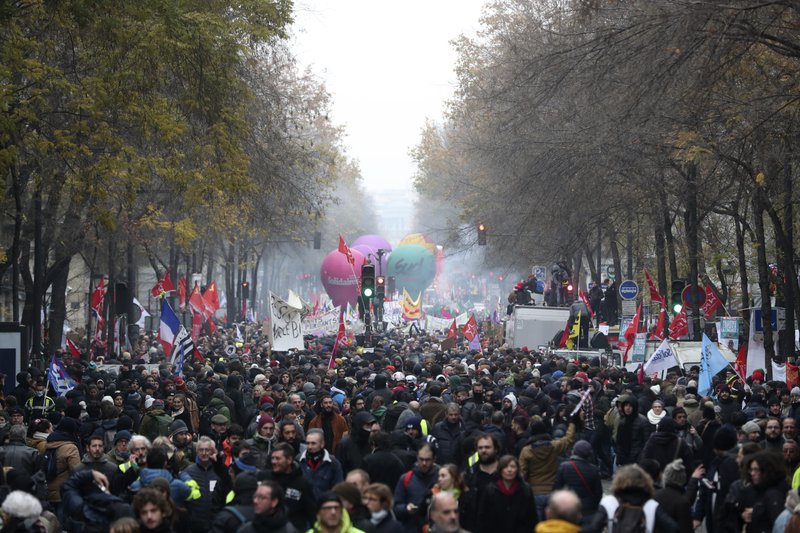 The planned overhaul of the French pensions system aims to streamline a complicated patchwork of provisions, but workers argue it will require them to work longer and will reduce their income.

The heated debate over the changes to the retirement system are laid bare in the nationwide strike and protests taking place Thursday.

The popular discontent will test the resolve of the government of President Emmanuel Macron, who says it remains determined to pass the reform next year.

Here’s a look at the planned measures, and why they are generating debate.

All French retirees receive a state pension. The average pension this year stands at 1,400 euros per month ($1,500 per month) once taxes are deducted. But that average masks differences across 42 different pension systems.

The easy bit: Employees in the private sector are part of the general pension system. They account for about 7 out of 10 workers.

The more complicated bit: many professions have a special pension scheme. Some people, like rail workers and air crews, are allowed to take early retirement. Others, like lawyers and doctors, pay less tax.

Civil servants - who number over 5 million - also have a separate pension scheme.

Over the last three decades, governments have made changes but each reform has been met with massive demonstrations. None of the changes managed to simplify the system.

Macron wants to replace the current way of doing things with a unified scheme, so that all workers have the same pension rights.

He promises that would make the system simpler and fairer - and also financially sustainable in the long-term, since it is projected to be in a deficit in coming years.

Labor unions say most workers would lose money with the new system due to a change in the calculation of pensions. People who qualify for special provisions fear the loss of benefits.

The government has promised the legal retirement age of 62 won’t change, but new financial conditions will encourage some people to work longer.

Macron’s government said some specific measures would be maintained, such as allowing military and police officers and people with physically demanding jobs to retire early.

The changes would not apply to current pensioners.

The government has opened talks with unions, business associations and professional organizations.

Prime Minister Edouard Philippe is expected to provide details and make new proposals next week and plans to present the bill in parliament early next year.

The government had initially said the changes will only apply to people born after 1963, starting in 2025. But in response to union concerns, Philippe recently said the start date may be delayed to avoid a “brutal transition.”

The government’s plans will largely depend on the protests, since the strikes are expected to last for days, even weeks. Hard-left unions are calling on Macron to abandon the reform altogether.