A princess, dates and milk welcome Ivanka Trump to Morocco 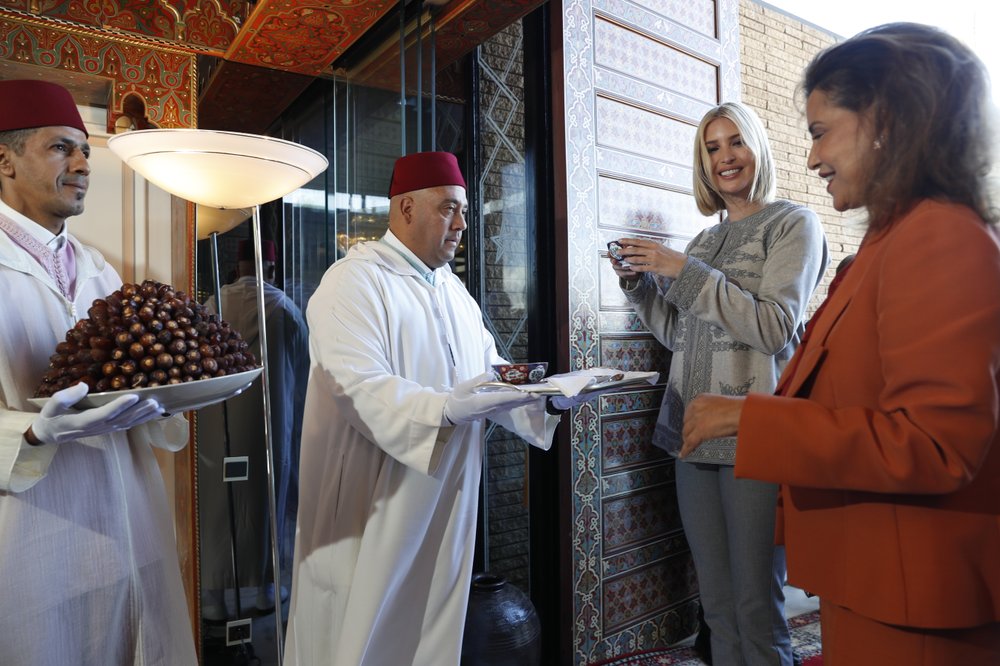 Ivanka Trump, the daughter and senior adviser to President Donald Trump, is greeted by Princess Lalla Meryem of Morocco and is offered dates and milk, as she arrives in Rabat, Morocco, Wednesday, Nov. 6, 2019, where she will promote a global economical program for women. (Photo: AP)

A princess, dates, and milk welcomed Ivanka Trump to Morocco on Wednesday as she opened a three-day visit to promote the economic empowerment of women in developing countries.

Morocco’s Princess Lalla Meryem, Foreign Minister Nasser Bourita and other officials met the daughter of President Donald Trump at the airport in the capital of Rabat.

Ivanka Trump, a White House adviser, and the princess sat on a sofa and talked for several minutes before departing. She is visiting Morocco to promote the US government’s Women’s Global Development and Prosperity Initiative, which she spearheads.

Launched in February, the program aims to help 50 million women in developing nations advance economically over the next six years.

Ivanka Trump has promoted the initiative during trips this year to sub-Saharan Africa and South America.

She will be accompanied in Morocco by Sean Cairncross, CEO of the Millennium Challenge Corp., an independent US foreign aid agency that’s working with the Moroccan government to promote economic growth, reduce poverty and strengthen institutions.

The trip comes after Morocco updated land rights laws that critics say shortchanged women. Ensuring that women can create wealth by inheriting or owning land or other property is a focus of Ivanka Trump’s initiative.

She arrived in Rabat on a national holiday in Morocco and had no public appearances scheduled for Wednesday.

On Thursday, Ivanka Trump arranged to visit an olive grove on the outskirts of the capital that is a Millennium Challenge Corp. project.

She’ll also solicit feedback on women’s empowerment during a roundtable discussion in Rabat with female leaders.