WORLD A rising Bloomberg qualifies for US Democratic debate

A rising Bloomberg qualifies for US Democratic debate

US media tycoon Michael Bloomberg has qualified for Wednesday's Democratic presidential debate, after two new polls shows him leapfrogging rivals, including Joe Biden, to claim second spot in the race for the party nomination. 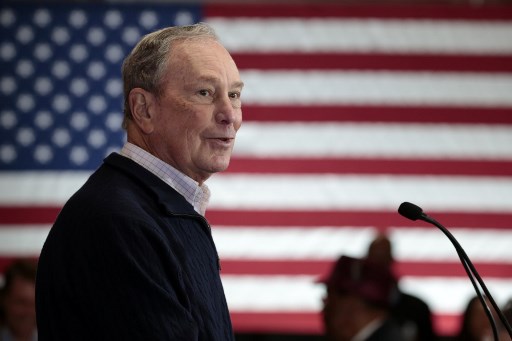 Bloomberg's surge meant that he cleared a polling threshold set by the Democratic National Committee, placing the former New York mayor on stage to spar with fellow candidates, several of whom have launched broadsides against him, for the first time.

With Bloomberg's political stock rising, a spokesman said that the candidate would sell Bloomberg LP, the global news giant that bears his name and made him a billionaire, if his presidential campaign is successful.

"There will be no confusion about any of his financial holdings blurring the line between public service and personal profiteering," aide Timothy O'Brien told CNN in a clip released Tuesday.

The businessman who jumped into the race in November, nearly a year after many rivals, earned 19 percent support nationally, second to leftist Bernie Sanders at 31 percent, in an NPR/PBS NewsHour/Marist survey.

The moderate former vice president Biden came in third at 15 percent in the poll of some 1,400 registered voters, while progressive Senator Elizabeth Warren was at 12 percent and pragmatist Senator Amy Klobuchar at nine percent.

"Mike is looking forward to joining the other Democratic candidates on stage and making the case for why he's the best candidate to defeat Donald Trump and unite the country," the Bloomberg campaign said in a statement.

"The opportunity to discuss his workable and achievable plans for the challenges facing this country is an important part of the campaign process."

The 78-year-old Bloomberg, seen as a centrist, has been rising in polling as he spends hundreds of millions of dollars of his vast personal fortune on campaign ads.

In the RealClearPolitics national poll average he has climbed into third spot, behind Sanders and Biden.

More evidence of his momentum: he is coming under frequent attack from rivals, including Trump himself.

Sanders has repeatedly slammed Bloomberg for his attempt to "buy" his way into the presidential race, and by highlighting Bloomberg's absence on the campaign trail in early-voting states.

Others have aimed sharp criticism at Bloomberg's past positions and comments that have been criticized as crude, racist or misogynistic.

Wednesday's debate will be held in Las Vegas, three days ahead of Nevada's caucuses.

Bloomberg is skipping the first four states to concentrate on so-called Super Tuesday on March 3, when 14 states vote on choosing a Democratic nominee.

Bloomberg was a Democrat until he left the party in 2001.

He served three terms as New York's mayor, first as a Republican, then as an independent. He re-registered as a Democrat in 2018.