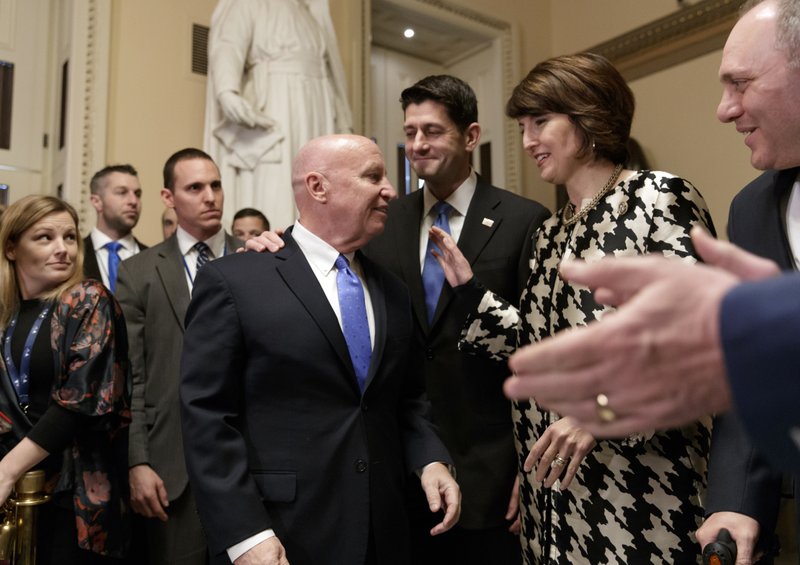 So argue Republicans in Congress, who hail their tax overhaul as an economic tonic that will deliver benefits to ordinary Americans well into the future.

Democrats and most nonpartisan analysts see things rather differently — and they point to history to argue their case. They see the tax plan as an ill-conceived bill that will further enrich the wealthy and swell the government’s debts by at least $1 trillion in the next decade. Previous tax cuts, they note, have done little to boost hiring, raise wages or accelerate economic growth.

Either way, President Donald Trump is prepared to sign the measure into law this week, to take effect in 2018, after the House and Senate each passed it Wednesday. The bill — approved without a single Democratic vote in Congress —will mark the most far-reaching rewrite of tax law since 1986.

Over the weekend, Trump spoke expansively about the economic bounty he said the bill would unleash. Noting that the American economy grew at an annual rate of at least 3 percent in each of the past two quarters, Trump predicted that “we could go to 4, 5, or even 6 percent, ultimately.... We are really going to start to rock.”

The administration’s official forecasts are more restrained. The Treasury Department and the White House budget office predict that the tax bill and other policy steps will support average annual growth of 2.9 percent from 2018-2027. That estimate adds about 1 percentage point to the average annual growth the Congressional Budget Office had forecast before any policy changes.

Nonpartisan observers expect the bill to deliver far less. The University of Pennsylvania’s Penn Wharton Budget Model says it will increase growth by no more than 0.12 percentage point a year from 2018 to 2027— and swell the federal debt by at least $1.9 trillion in that time.

The plan is nothing if not ambitious.

It permanently slashes the corporate tax rate to 21 percent from 35 percent. It imposes a low one-time tax on companies’ overseas earnings, nudging them to return money they’ve stashed abroad. It provides a windfall to people who pay the personal tax on business earnings. It will narrow and eventually end the tax on wealthy estates. And it will slash individual tax rates — but allow those cuts to expire in 2026.

The plan reflects the economic philosophy that has dominated the Republican Party since the presidency of Ronald Reagan in the 1980s: That cutting taxes and regulations and shrinking government will spur businesses to invest — in factories, equipment, software, people — and thereby energize the American economy. The benefits of a tax windfall to corporations and the wealthy will trickle down, in time, to ordinary Americans.

Kevin Hassett, chairman of Trump’s Council of Economic Advisers, has asserted that the corporate tax cuts alone will end up swelling the average household’s income by at least $4,000 a year.

And Republicans say the economy could use a lift. Its growth from 2010 to 2016 has clocked in at annual average pace of 2.1 percent a year, unimpressive compared with the 3.2 percent average growth from 1948 through 2016.

Like European countries and Japan, the U.S. economy has been slowed by a slump in worker productivity. Productivity — worker output per hour — slogged ahead at an average annual rate of just 0.6 percent from 2011 to 2016, a fraction of the post-World War II average of 2.1 percent.

The more productive workers are, the more employers can afford to pay them. So productivity gains are vital to rising wages and living standards.

One way companies can make workers more productive is to invest in technology to make them more efficient. But in the 8½ years since the Great Recession officially ended, businesses have been slower to invest than they were during previous long expansions.

The Republican tax plan, its architects say, could accelerate such investment. Besides slashing corporate tax rates, the bill lets companies immediately write off the full cost of new equipment.

“It would be good in the short term,” said Sung Won Sohn, economics professor at California State University, Channel Islands. “Corporate cash flow would improve, helping investments. Businesses would be spending money and then hiring people.”

But economists caution that the gains will likely be modest in the long run. Companies already hold nearly $2.4 trillion in cash. And they can still borrow at historically low rates. So if they want to invest more, they can already do so.

Some smaller companies might invest some portion of their tax windfall. But large companies make their capital spending plans years in advance and aren’t likely to make major changes, Song says.

What’s more, most previous tax cuts have produced minimal economic gains. Wages actually fell, for example, after corporate rates were cut in the 1986 tax reform plan. And a one-time cut in the tax on overseas corporate profits in 2004 did little to boost investment or hiring.

Then there’s the timing of the 2017 tax plan. The economy is nearly nine years into its recovery. Significant gains at this point would be unusual. The unemployment rate has reached a 17-year low of 4.1 percent.

“Adding additional stimulus at this point, you run the risk of running the economy a little too hot,” Song said.

Song predicts that the tax plan will provide a brief “sugar high,” lifting growth by 0.3 percentage point each in 2018 and 2019. But he then sees the effects wearing off. The Federal Reserve, which has already raised rates three times this year, would likely offset a stimulus from the tax plan by raising rates more aggressively to keep the economy from overheating.

“The deficit-financed tax cuts are particularly ill-timed,” Mark Zandi, chief economist at Moody’s Analytics, wrote in a report this week. “They will quickly juice-up economic growth, but in a fully employed economy this will result in wage and price pressures and higher interest rates.”