WORLD A U-turn, an angry president and a fateful walk to a church

A U-turn, an angry president and a fateful walk to a church 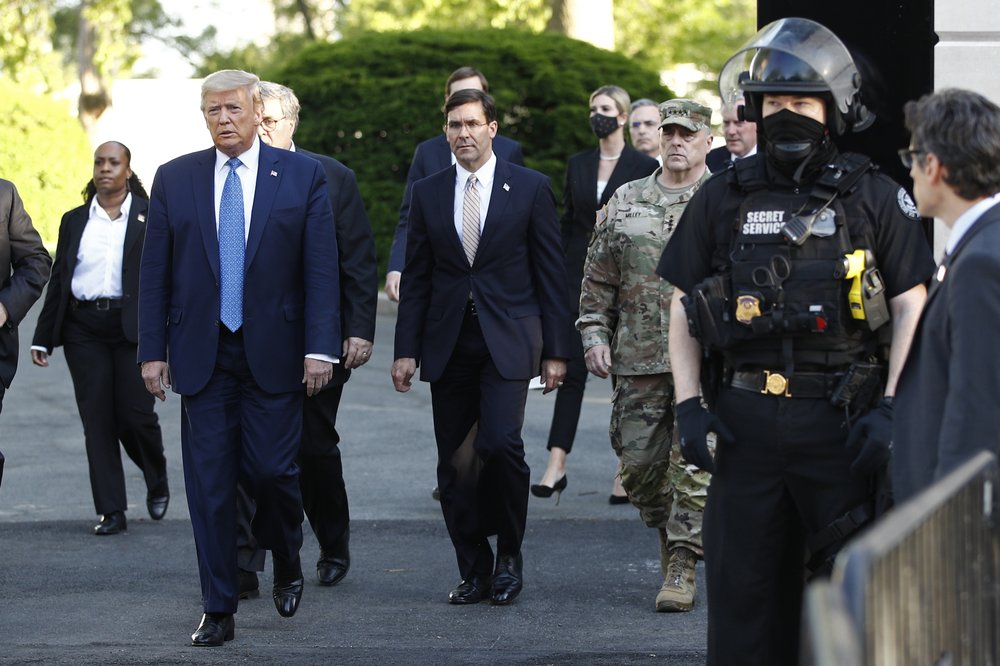 Defense Secretary Mark Esper was three blocks from the FBI’s Washington field office. He had planned to confer there at a security command center, but plans changed with an unexpected call to divert immediately.

Go the White House. President Donald Trump wanted a briefing from him and Gen. Mark Milley, chairman of the Joint Chiefs of Staff, on how the military was handling security as protests grew on the streets of the nation’s capital.

Esper’s driver pulled a U-turn in the middle of the street and flipped on the flashing lights, and they rushed to 1600 Pennsylvania Avenue.

It was late afternoon on Monday, June 1 — one of the more consequential days of Donald Trump’s presidency, when he was forced to reckon with rapidly swelling demonstrations after George Floyd’s death in the hands of Minneapolis police officers.

This account of Trump’s decision-making, based on a senior defense official as well as several others in the Trump administration, offers insight into how the president was pushing for the fastest, most extreme measures while advisers at the Pentagon tried to persuade him to take a more moderate approach.

The officials asked that their names not be used to describe sensitive deliberations.

At an Oval Office meeting late Monday morning, tempers were flaring. Trump and some of his senior aides wanted federal troops on the streets, and fast.

Some Washington businesses had been vandalized Sunday night and St. John’s Church, near the White House, had sustained fire damage. Trump was unhappy. Some governors, and local authorities in the District of Columbia, were not doing enough to stop violence, Trump believed.

By Monday morning he was considering a dramatic move — invoking the Insurrection Act so that he could use federal troops to enforce the law.

According to a senior defense official, Trump wanted 10,000 federal troops immediately on the streets to control a situation some aides believed could escalate dangerously.

Esper and Milley, however, argued against calling out the active-duty forces, fearful that it would militarize a problem that should be handled by civilian law enforcement. Violent elements among the protest crowds, the two men believed, were too small and manageable to justify calling out the military.

The White House did not dispute or confirm the 10,000 figure. A senior White House official recalled Trump urging Esper and Milley to get as many troops as needed to secure the city. The president stressed that Sunday night’s unrest, in which St. John’s Episcopal Church sustained fire damage and some businesses were vandalized, had shown that security was inadequate.

With the president’s demands in mind, and hoping they could stall his move to use federal troops, Esper and Milley moved swiftly to try to get governors to send as many National Guard troops from their states as possible to supplement the roughly 1,300 District of Columbia National Guard members and a hodgepodge of Park Police, Secret Service and other federal law enforcement officers dealing with protesters.

Because of the District of Columbia’s special status and its dizzying mix of jurisdictions, the FBI field office had been selected to serve as a command post to coordinate the movements and functions of various security forces. Attorney General William Barr was in charge. That’s why Esper was headed there from the Pentagon on Monday afternoon when he got the call to go see Trump again.

Milley had gone to the command center, also. And figuring he had seen the last of the White House for the day, he made a decision he later regretted — changing from his dress uniform, which is standard for a White House visit, to his battle fatigues, everyday wear at the Pentagon and when mixing with troops. Milley figured he would have a long night, including time with troops on the street.

Another surprise was in store for Esper and Milley when they reached the White House. After meetings, Trump went to the Rose Garden, where he noted Americans’ revulsion at Floyd’s death and declared himself the “president of law and order.”

“In recent days, our nation has been gripped by professional anarchists, violent mobs, arsonists, looters, criminals, rioters, antifa and others,” he said. “A number of state and local governments have failed to take necessary action to safeguard their residents.”

That failure, in Trump’s view, made it urgent to get more security on the streets, even if it meant using active-duty forces, about 1,300 of which had been moved to military bases just outside of Washington, just in case.

Esper and Milley, joined by Barr, opposed the use of federal troops at that point. To Esper, a failure to get more Guard troops called up would mean there would be active-duty troops all over the country confronting protesters, a scene he and Milley saw as unwise and untenable.

After Trump finished his remarks in the Rose Garden he gathered aides and officials, including Esper and Milley, for a walk across Lafayette Park to St. John’s Church. The president held up a Bible to pose for photographers.

Critics would slam both Esper and Milley for their presence at the photo op — especially with Milley in battle fatigues. The scene fed a perception that Milley was giving tangible meaning to Trump’s threat to use the military on city streets, and that Esper was allowing himself to be used to advance a political agenda.