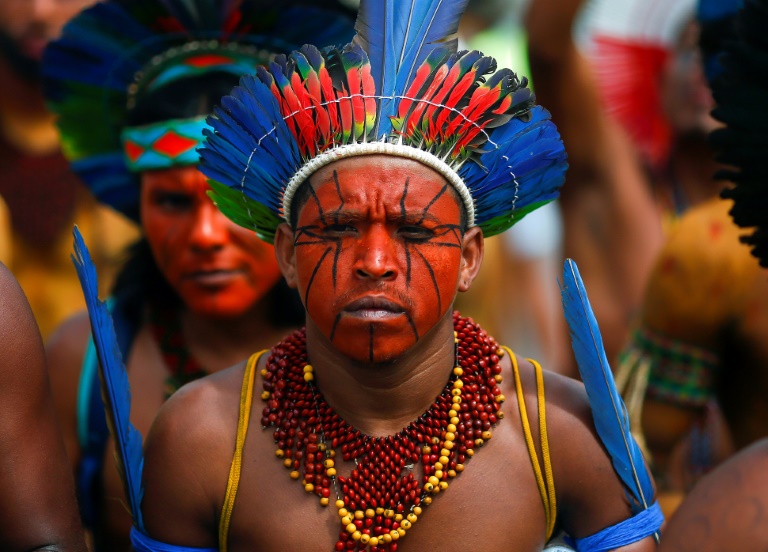 According to some estimates, 90 percent of the native population of the Americas was wiped out by disease after the arrival of the first Europeans (Photo: AFP)

Legendary photographer Sebastiao Salgado has warned of a "genocide" of the Amazon's indigenous peoples if the Brazilian government does not do more to protect them from the coronavirus.

The country's far-right president, Jair Bolsonaro -- who has dismissed the virus as a "little flu" -- has long been accused of encouraging loggers and farmers to invade indigenous reserves and of dismantling government agencies set up to protect them.

Brazilian-born Salgado, who shot to fame with his almost biblical images of gold miners in the Amazon, told AFP that "there was a huge risk of a real catastrophe".

"With gold miners, loggers, farmers and religious sects invading their territories... there is a big risk of the coronavirus infecting the indigenous people, who don't have any antibodies."

According to some estimates, 90 percent of the native population of the Americas was wiped out by disease after the arrival of the first Europeans.

Salgado has launched a petition calling for action to protect the Amazonian peoples which has garnered almost a quarter of a million signatures, including Madonna, Oprah Winfrey and Brad Pitt.

He said the risk of genocide was not an exaggeration.

"That is what I call it. Genocide is the elimination of an ethnic group and also of its culture.

"I believe that is where the Bolsonaro government is leading us, because their position is 100 percent against the indigenous people."

With hospitals in Sao Paulo, Brazil's biggest city, reported to be at "near collapse" as the country has become the epicentre of the pandemic in South America, Salgado warned that the threat of death was hanging "over a large portion of the population".

"Bolsonaro is against a lockdown, and they do not have the medical infrastructure that we have" in Europe, said Salgado, 76, who has long lived in Paris.

"If the virus gets into the forest, they don't have the means to help. The distances are so huge. The indigenous people will be abandoned," the photographer said.

The virus has already infected 40 indigenous groups, with 537 positive cases and 102 deaths, according to the Brazilian Indigenous Peoples' Association.

And on Tuesday, the indigenous rights group, Forest Guardians, warned that one tribe of hunter gatherers, the Awa Guaja, which traditionally has no contact with the outside world, was in danger of being wiped out because of encroachment by loggers and farmers.

We need a 'new system'

Brazil has an estimated 800,000 indigenous people from 300 ethnic groups.

"If you don't put an end to the invasions of our territory, the uncontacted Awa Guaja people will die," said the Forest Guardians, several of whose members have been murdered in recent months.

Salgado said that the coronavirus was "also a product of our destruction of the environment and the planet".

Yet, he added, it had given us a chance to rethink everything.

"We have become the aliens" living in towns and cities, he said.

"We destroy everything so we can feed it into the cities and keep them going."

He said that humanity needed to have a long hard look at how it was living, and change course.

"We will have so much to do" after the virus, he said.

"We have to create a new and properly productive system... If we go in that direction, we will have to guarantee that a large part of the riches of the planet go towards its reconstruction."