A year after US school massacre, gun control remains elusive 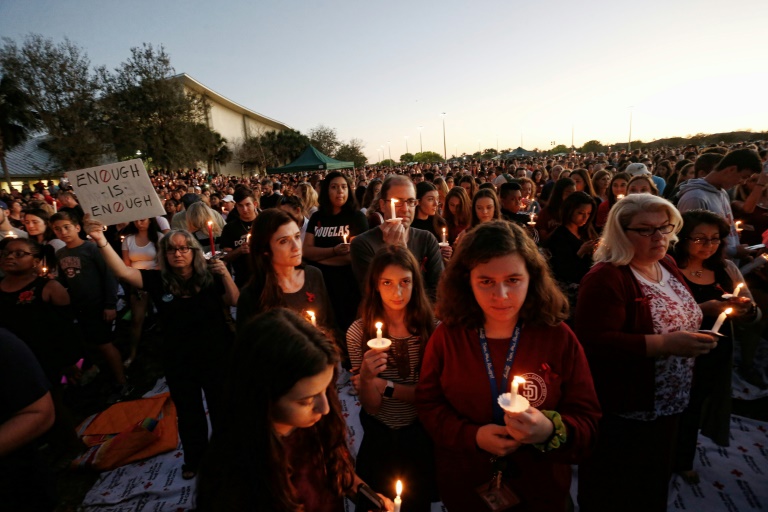 The Parkland survivors, pictured at a vigil the day after the massacre, rejected the usual outpourings of sympathy offered by politicians. (Photo: AFP)

On Valentine's Day of last year, a 19-year-old armed with a military-style assault rifle walked into his old high school in Parkland, Florida and slaughtered 17 people.

That spasm in America's epidemic of gun violence gave new impetus the debate on controlling firearms, prompting marches across the country and a fresh round of hand-wringing in cable news studios.

Many of the Marjory Stoneman Douglas High School survivors such as David Hogg and Emma Gonzalez remain national figures a year on -- a testament to their tenacity in keeping the atrocity in the headlines -- yet concrete reform has remained limited and local.

Meanwhile America risks becoming inured to the carnage: four months before Parkland a gunman killed 58 people at a festival in Las Vegas while, 16 months earlier, a massacre at a gay night club in Orlando left 49 dead.

And with 37 mass shootings -- those with at least four victims, not including the assailant -- recorded already in the US this year, it is tempting to conclude that almost nothing has changed.

The inertia on gun control endures despite the best efforts of the Parkland students, who rejected the usual outpourings of sympathy offered by politicians and launched a nationwide movement seeking tougher regulation on sales.

"So many shootings have happened and you get 'thoughts and prayers' and then nothing happens," said Ryan Servaites, who survived the shooting.

"It's an absolute shame that our government has done absolutely nothing about it. So you know, we're fed up," Servaites, 16, told AFP.

A month after the shooting, the student activists brought together hundreds of thousands of demonstrators in Washington, under the "March for Our Lives" banner.

The teenagers toured 26 states, visiting schools and talking with lawmakers. They published a book, took part in an HBO documentary and, most importantly, caused state laws to be changed.

"In just 11 minutes, our childhood ended," Hogg and Gonzalez wrote in November in The Washington Post.

Florida is governed by Republicans and posed a major challenge for the student activists. But they successfully pushed for passage of state laws opposed by the powerful US gun lobby, the National Rifle Association.

Among other changes, a "red flag" law was passed allowing judges to order the seizure of guns from people deemed to be mentally unstable and the minimum age for purchasing a gun was raised to 21.

The sale and possession of devices known as bump stocks, which allow semi-automatic weapons to fire as fast as illegal machineguns, and which were used to such deadly effect in Las Vegas, were also banned.

In December, President Donald Trump barred them at the national level.

After Parkland, 26 states and US capital Washington approved 67 laws related to gun control, according to the Giffords Law Center to Prevent Gun Violence.

In a report last December, the center said the movement for gun safety in America "experienced a tectonic shift in 2018."

Yet significant nationwide reform to slash gun deaths has largely eluded the activists, who have vowed to entrench their campaign in 2019.

On Friday last week lawmakers from both parties presented Congress with a bill that would require universal background checks prior to gun purchases.

Under current laws, licensed dealers must carry out background checks on would-be buyers, but loopholes allow people to avoid such checks if they buy from a private seller, at gun shows or over the internet.

Defenders of the Second Amendment to the US Constitution, which establishes the right to bear arms, will fight the bill.

The NRA said such a law would not dissuade criminals, who will always find some way to acquire a firearm.

"These bills attack law-abiding gun owners by placing further burdens on gun ownership and use," its website states.

Tom Palmer, a gun rights supporting political scientist and vice president of free-market think tank Atlas Network, told the Miami Herald the two sides in the gun debate could not be more polarized.

Undeterred, a group of Parkland survivors launched a petition on Monday which, if it garners the almost 800,000 signatures needed, will trigger a referendum on banning military-style assault rifles in Florida.

Meanwhile Nikolas Cruz, the defendant in the Parkland shooting, awaits his day in court. Prosecutors have said they will seek the death penalty on 17 counts of pre-meditated murder and 17 counts of attempted murder.