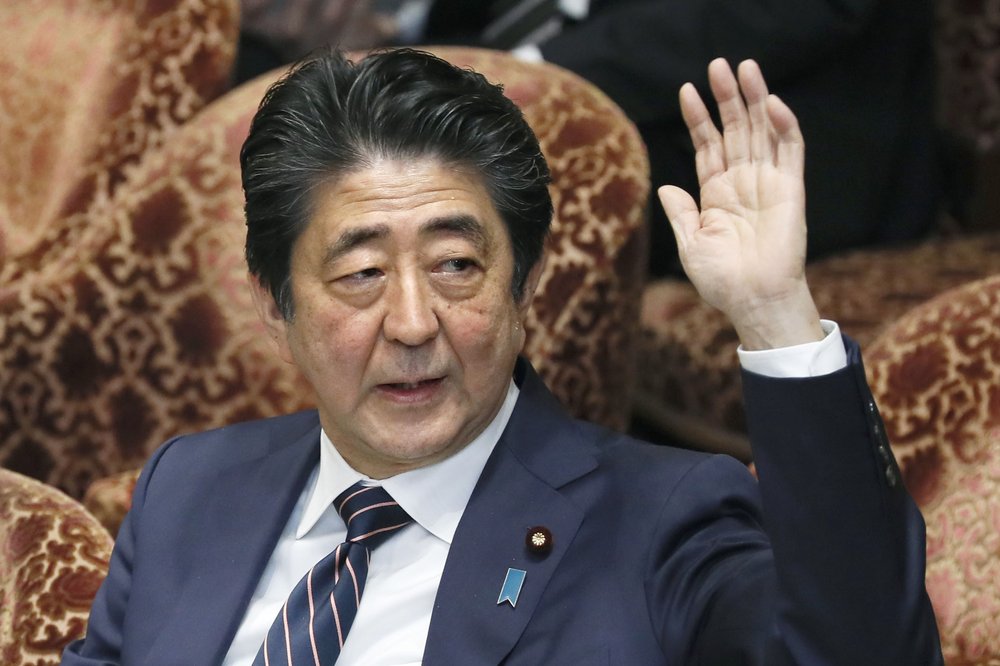 Japanese Prime Minister Shinzo Abe raises his hand during a parliamentary session at the Lower House in Tokyo, Monday, Feb. 18, 2019. Abe and his chief spokesman have declined to say if Abe nominated President Donald Trump for a Nobel Peace prize. Speaking in parliament on Monday, Abe said the Nobel committee has never in a half-century disclosed the identity of the person or groups behind such nominations. He said, “I thus decline comment.”(Photo: AP)

Japanese Prime Minister Shinzo Abe kept quiet Monday over President Donald Trump’s claim that he had nominated him for the Nobel Peace Prize, but praised him and emphasized he did not deny doing so.

Trump’s assertion Friday that Abe had nominated him for the honor and sent him a copy of the letter has raised questions and criticism in Japan.

Questioned in parliament, Abe praised Trump for his dealings with North Korea but said, “In light of the Nobel committee’s policy of not disclosing recommenders and nominees for 50 years, I decline to comment.”

Neither the prime minister nor his spokesman denied Trump’s comment.

“I never said I didn’t” nominate him, Abe said in response to a follow-up question by Yuichiro Tamaki, a lawmaker for the opposition Democratic Party for the People.

Tamaki said in a tweet Monday that he was concerned such a nomination would “send the wrong message to North Korea and the rest of international society.”

Junya Ogawa, another opposition lawmaker, cited various policies and actions by Trump that he said ran contrary to the spirit of the peace prize, calling the nomination “an embarrassment for Japan.”

In responding to Tamaki’s questions in parliament, Abe lauded Trump for meeting with Kim and working to resolve the crisis over North Korea’s nuclear program and missile tests. Trump had also addressed Japan’s concerns over past abductions of Japanese citizens by North Korea, Abe said, adding “he and the entire White House also actively cooperated in resolving the issue.”

Trump’s claim that Abe had sent him a “beautiful copy” of a letter sent to the Nobel committee could not be immediately verified. Nor could a report Sunday by the Japanese newspaper Asahi Shimbun, citing unidentified government sources, that Abe had nominated Trump at the U.S. president’s request.

The situation is awkward for Abe at a time when his government is under fire for allegedly manipulating data on wages to suggest his economic policies were yielding better results than was actually the case.

“Being Trump’s closest friend among world leaders has not worked out too well for Abe,” said Jeff Kingston, director of Asian Studies at Temple University Japan. “He’s not making Abe look very good.”

The U.S. is Japan’s ally and anchor for national defense and Abe has assiduously cultivated cordial ties with Trump. He was the first foreign leader to meet with Trump after he won the 2016 presidential election. The two share a love for golf and have teed off together both in Japan and the U.S.

The halt to North Korean nuclear and missile tests since early last year has been a relief for Japan, which sits well within the range of its missiles and has sometimes had test rockets land in its territorial waters.

Abe has been keen to claim progress in resolving the abduction dispute with North Korea, an important issue for his nationalist political base.

The deadline each year for Nobel Peace Prize nominations is midnight, Jan. 31. The Nobel committee’s website says there are 304 candidates for the 2019 prize, 219 individuals and 85 organizations.

Former U.S. President Barack Obama was awarded the Nobel Peace Prize in 2009, his first year in office, for laying out a U.S. commitment to “seek the peace and security of a world without nuclear weapons.”

Trump complained Friday that Obama was there “for about 15 seconds” before he was awarded the prize.

Trump’s landmark June 2018 summit with Kim in Singapore was replete with pomp but thin on substance. The two leaders are due to meet later this month in Hanoi, Vietnam. The president’s comments Friday drew speculation that South Korean President Moon Jae-in might have been the one who nominated the president, but his spokesman said he had not.

Kim Eui-kyeom, Moon’s spokesman, said Moon believed Trump “has sufficient qualifications to win the Nobel Peace Prize” for his work toward peace between North and South Korea, which have yet to sign a peace treaty after their 1950-53 war.

The Nobel committee chooses the recipient of the prize in early October by a majority vote. The prize is awarded on Dec. 10, in Oslo, Norway.