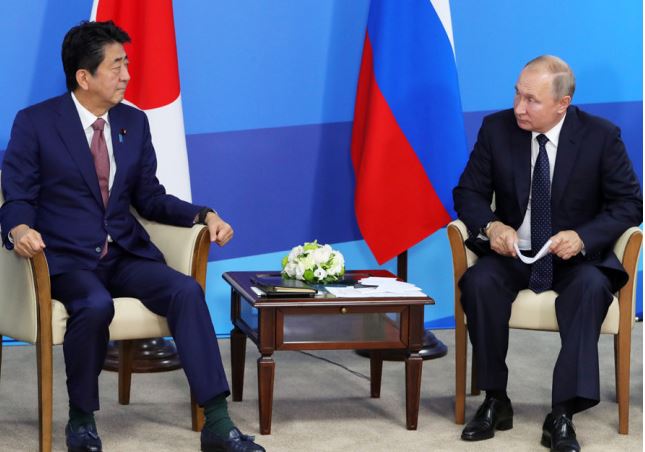 "Let us each bear responsibility towards history. Let us conclude a peace treaty and unleash in one fell swoop the unlimited potential that the people of our two countries hold," Abe said at the plenary session of the Eastern Economic Forum held in the far eastern city of Vladivostok.

Putin cheered Abe's statement, saying that he believed in the Japanese prime minister's sincere wish to conclude the treaty.

However, he pointed out that there were a lot of issues related to the conclusion of the treaty which went beyond bilateral relations between Moscow and Tokyo.

"There are military, defense issues and security issues, and here we must take into account the position of third countries and Japan's obligations to them, including the United States," Putin said.

Putin said both he and Abe would move forward towards concluding the peace treaty on the basis of the 1956 declaration, no matter how difficult it would be.

According to a joint declaration signed in 1956, Russia agreed to return two of the islands after a bilateral peace treaty is signed, while Japan refused to sign such an agreement, insisting on the return of all four islands.

Russia agrees to work on the signing of the treaty on the basis of the 1956 declaration, but insists that Japan should first recognize the sovereignty of Russia over the islands.

The two countries have held rounds of consultations on joint economic activities on the islands, viewing this cooperation as a step toward a peace treaty, but so far no major breakthrough has been achieved.