Prime Minister Shinzo Abe's ruling coalition secured a majority in Japan's upper house of parliament in elections Sunday, but it lost ground and will not reach the super-majority needed to propose constitutional revisions, according to vote counts by public television and other media. 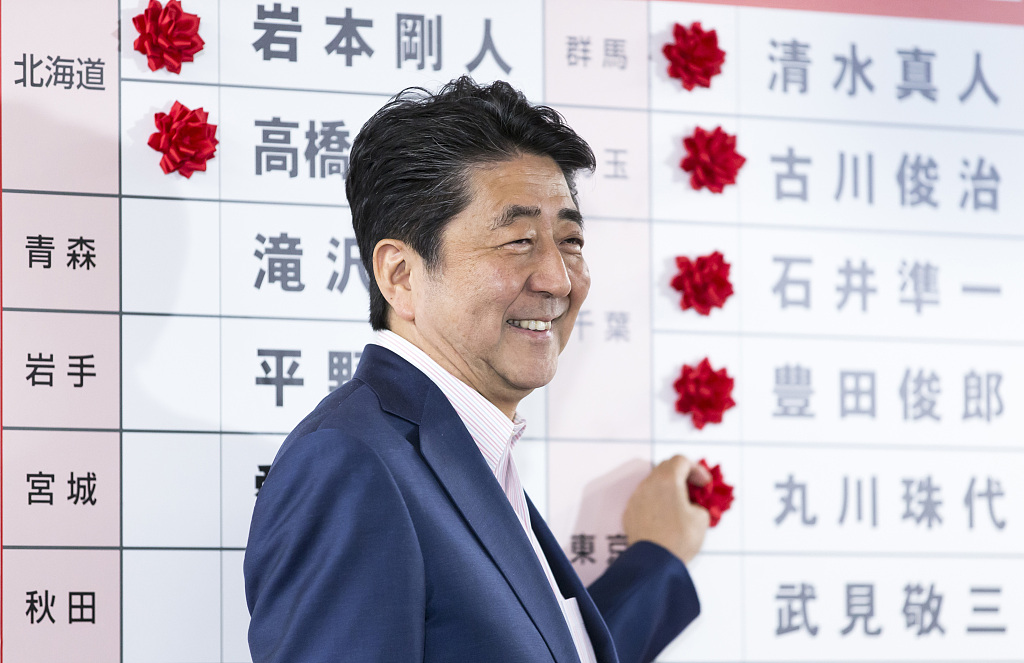 NHK public television said Abe's Liberal Democratic Party and its junior partner Komeito won 69 seats with nine remaining to be decided after midnight. If Abe gained support from members of another conservative party and independents, he would reach 76, still short of the 85 needed, NHK said.

Abe's ruling bloc has a super-majority of two-thirds of the seats in the lower chamber, but Sunday's results mean he has a slimmer chance of achieving his long-cherished goal of reforming Japan's postwar pacifist constitution before his term ends in 2021.

Nonetheless, Abe welcomed the results, saying winning the majority means the public's mandate for his government.

"I believe the people chose political stability, urging us to pursue our policies and carry out diplomacy to protect Japan's national interests," Abe told an interview with NHK. He was at his party's election headquarters where he monitored results, placing red ribbons on winners' names written on a panel.

Up for grabs were 124 seats in the less powerful of Japan's two parliamentary chambers. There are 245 seats in the upper house — which does not choose the prime minister — about half of which are elected every three years.

Media surveys had indicated Abe's ruling bloc would keep a majority, with most voters considering it a safer choice over an opposition with an uncertain track record.

Two-thirds of both houses must approve a constitutional revision before the revision can be decided in a national referendum.

His goal was already a challenge because voters are more concerned about their jobs, economy and social security. Abe, who wants to bolster Japanese defense capability and role, is now proposing adding the Self-Defense Force, or Japan's military, in the war-renouncing Article 9 of the constitution. Abe said he plans to start from deepening discussion at parliamentary constitutional review board. He said he is not considering running for another term.

Abe said resolving the decades-old issue of Japanese citizens abducted to North Korea and signing a peace treaty with Russia would be his diplomatic priorities during the rest of his term.

Main opposition parties have focused on concerns over household finances, such as the impact from an upcoming 10% sales tax increase and strains on the public pension system amid Japan's aging population, while also trying to block Abe's ambition for a constitutional change.

Abe has led his Liberal Democratic Party to five consecutive parliamentary election victories since 2012. He has prioritized revitalizing Japan's economy and has steadily bolstered the country's defenses in the backdrop of North Korea's missile and nuclear threats and China's growing military presence. He also has cultivated warm ties with President Donald Trump.

The main opposition Constitutional Democratic Party of Japan and three other liberal-leaning parties teamed up in some districts. They stressed support for gender equality and LGBT issues — areas Abe's ultra-conservative lawmakers are reluctant to back.

At a polling station in Tokyo's Chuo district on Sunday, voters were divided over Abe's 6 1/2-year rule.

A voter who identified himself only as a company worker in his 40s said he chose a candidate and a party that have demonstrated an ability to get things done, suggesting he voted for Abe's ruling party and its candidate, as "there is no point in casting my vote for a party or a politician who has no such abilities."

Another voter, Katsunori Takeuchi, a 57-year-old fish market worker, said it was time to change the dominance of Abe and his ultra-conservative policies.

"I think the ruling party has been dominating politics for far too long and it is causing damage," he said.