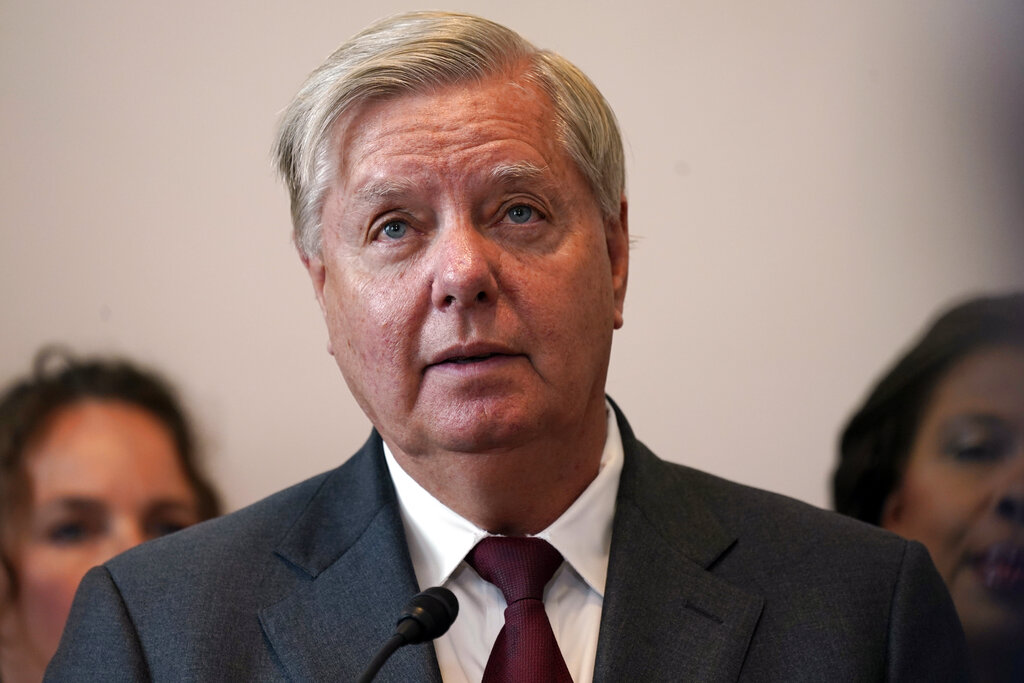 Don Bolduc didn't have much time to celebrate winning the Republican nomination for Senate in New Hampshire on Wednesday before he and other swing-state GOP candidates were on the defensive.

A conservative retired Army brigadier general, Bolduc insisted during the Republican primary he would “always default for a system that protects lives from beginning to end." But South Carolina Sen. Lindsey Graham's decision to introduce legislation this week that would create a national abortion ban created the prospect that a campaign talking point could become a reality.

With his attention now shifting to the November general election in a moderate state that President Joe Biden carried by more than 7 percentage points, Bolduc quickly distanced himself from Graham's measure.

“It doesn’t make sense,” he told Fox News, adding that abortion laws are better left to each individual state. “Women on both sides of the issue will get a better voice at the state level.”

With less than two months until the midterm elections, Bolduc's pivot is a sign of the challenge dividing Republicans in some of the most competitive states as they navigate abortion politics. The party was already facing a potential backlash from voters upset by the Supreme Court's June decision invalidating a woman's constitutional right to an abortion. But Graham's legislation risked adding to the headwinds, undermining the GOP's argument this summer that the future of abortion rights in the U.S. would be decided by individual states.

Graham’s bill would ban abortions nationwide after 15 weeks of pregnancy, except in cases of rape, incest or risk to the physical health of the mother. Congressional Republicans have introduced similar legislation in the past and, like those efforts, this measure is unlikely to become law.

But Democrats were quick to point to the measure to warn that handing control of Congress to Republicans could lead to a broader erosion of rights.

“In the world’s greatest democracy, Don Bolduc will make women second-class citizens,” New Hampshire Sen. Maggie Hassan, one of the Senate's most vulnerable Democrats, said at a quickly arranged press conference Wednesday. “National Republicans, from Mike Pence to leaders in the Senate and House, have waited years for the chance to ban abortion nationwide. If Don Buldoc is in the Senate, they would have a reliable vote to do just that.”

The legislation exposed deep frustration among Republican candidates and strategists who have found no answer on the politics of abortion since the Supreme Court's ruling. There was concern that the measure shifts attention away from Biden's vulnerabilities, including persistent inflation.

Graham’s plan, he said, “gives the Dems the chance to talk about abortion more. And right now Republicans are losing when talking about abortion.”

"I would love a total abortion ban — 15 weeks is not enough," Kirk said. “But I'm also not dumb; 25 days out from ballots going out the Democrats are applauding, thank you Lindsey Graham.”

Senate Republican leader Mitch McConnell, who is one seat away from majority control, notably declined to embrace Graham’s legislation.

“I think every Republican senator running this year in these contested races has an answer as to how they feel about the issue,” McConnell said Tuesday. He said most GOP senators prefer having the issue dealt with by the states, rather than at the federal level. “So I leave it up to our candidates who are quite capable of handling this issue to determine for them what their response is.”

Abortion would have been a dominant issue this fall whether Graham released his national abortion ban or not. A majority of Americans say Congress should pass a law guaranteeing access to legal abortion nationwide, according to a July AP-NORC Center for Public Affairs Research poll that found over half said they felt at least somewhat “sad” or “angry” about the Supreme Court’s decision.

Democrats have poured tens of millions of dollars into television advertising focused on abortion rights. Women have been registering to vote in greater numbers than men across the country. And several states that have not already banned abortion altogether are pushing forward with new restrictions.

“We have only come to the end of the beginning and the battle for life continues,” said Pence, who is considering a 2024 presidential run. "We must not rest and we must not relent until we restore the sanctity of life to the center of American law in every state in the nation.”

In Arizona, Republican Senate candidate Blake Masters described abortion as “demonic” during his GOP primary, calling for a federal personhood law that would give fetuses the same rights people have after they’re born. He has more recently toned down his rhetoric, focusing on restricting late-term abortions while allowing states to impose more stringent limits.

After winning the Republican nomination, Masters deleted references to his support for a personhood law from his campaign website and dropped language describing himself as “100% pro-life.” He says he supports an Arizona law banning abortion after 15 weeks, which he called “a reasonable solution.”

“Of course, I support Lindsey Graham’s 15-week bill, and I hope it passes,” Masters said this week. "If it doesn’t, I suggest and will introduce a third-trimester standalone bill. Certainly we can all agree that in America, we shouldn’t tolerate late-term abortion like China and North Korea do.”

In another battleground state, Georgia's Republican Senate nominee Herschel Walker released a statement supporting Graham’s proposal, having already declared during a GOP primary that he'd support abortion bans without any exceptions for rape, incest or the life of the mother.

“I am a proud pro-life Christian, and I will always stand up for our unborn children,” Walker said of Graham's proposal this week. “I believe the issue should be decided at the state level, but I WOULD support this policy.”

It was just the opposite in Colorado, where Republican Senate nominee Joe O'Dea said "a Republican ban is as reckless and tone deaf as is Joe Biden and Chuck Schumer's hostility to considering any compromise on late-term abortion, parental notification, or conscience protections for religious hospitals.

In Nevada, Republican candidate Adam Laxalt has said he would oppose a nationwide ban, but his campaign declined to offer a specific position on Graham's proposal when asked. It was similar in Pennsylvania, where Republican Senate contender Mehmet Oz suggested he would oppose the federal ban but did not say so explicitly.

“As a senator, he’d want to make sure that the federal government is not involved in interfering with the state’s decisions on the topic,” Oz spokesperson Brittany Yanick said.

And in Wisconsin, Republican Sen. Ron Johnson, who faces a tough reelection bid, has previously co-sponsored six 20-week national abortion ban proposals. But after the Supreme Court overturned Roe, Johnson said he supported that ruling and leaving the decision about abortions to the states.

The Republican senator, typically a Graham ally, appeared to stick with that position Tuesday while not taking a firm position on Graham’s bill. He told CNN that abortion should be decided by “we the people” in the 50 states.