About 20 Chinese tourists injured after bus rolls in New Zealand 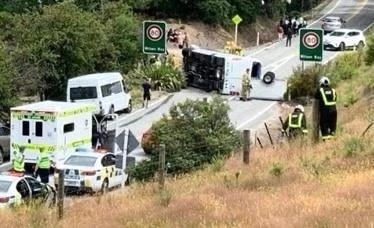 WELLINGTON, Jan. 21 (Xinhua) -- A bus rolled on a scenic road between Glenorchy and Queenstown in New Zealand's South Island on Tuesday, which left about 20 Chinese tourists injured, among whom two were under serious conditions.

The Chinese embassy in New Zealand confirmed that the injured people were part of a Chinese tourist group.

The two seriously injured people have been sent to hospital. Ambulance, rescue helicopters and police cars rushed to the scene and the road was blocked.

No death has so far been reported from the incident.

The Chinese consulate general in Christchurch has sent people to assist and visit the injured at hospital.

Glenorchy, a small scenic town and one of the most popular tourist destinations in New Zealand, is located 45 km from Queenstown in South Island.