WORLD About half say Trump should be charged for 1/6: AP-NORC poll

About half say Trump should be charged for 1/6: AP-NORC poll

About half of Americans believe former President Donald Trump should be charged with a crime for his role in the U.S. Capitol attack on Jan. 6, 2021, a new poll shows. 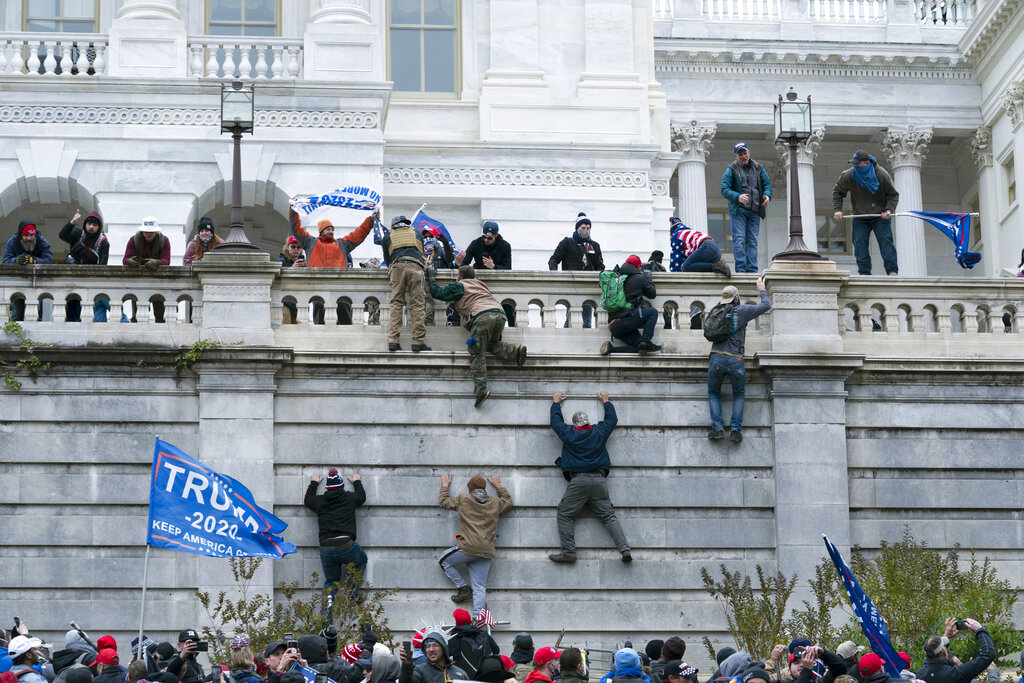 Supporters of Donald Trump scale the west wall of the the US Capitol in Washington on January 6, 2021. (Photo: AP)

The survey from The Associated Press-NORC Center for Public Affairs Research finds that 48% of U.S. adults say the former president should be charged with a crime for his role, while 31% say he should not be charged. An additional 20% say they don’t know enough to have an opinion. Fifty-eight percent say Trump bears a great deal or quite a bit of responsibility for what happened that day.

The poll was conducted after five public hearings by the House committee,investigating Jan. 6, which has sought to paint Trump’s potential criminal culpability in the events that led to deadly insurrection. But it was taken before Tuesday’s surprise hearing featuring former Trump White House aide Cassidy Hutchinson. Her explosive testimony provided the most compelling evidence yet that the former president could be linked to a federal crime, experts say

Views on Trump's criminal liability break down predictably along party lines, with 86% of Democrats but only 10% of Republicans saying Trump should be charged with a crime. Among Republicans, 68% say he should not be charged and 21% say they don’t know. Still, the fact that nearly half the country believes he should be prosecuted is a remarkable position for the former president, pointing to the difficulties he could face if he makes another run at the White House in 2024.

For Ella Metze, a South Carolina Democrat, Trump's culpability has been clear from the beginning, when he urged his supporters to march to the Captiol on the morning of Jan. 6 and “fight like hell.”

“It was meant to provoke violence because he kept encouraging them," the 86-year-old told The Associated Press. "As it happened, I watched it all and I just thought why doesn't somebody stop this? Why doesn't he stop this?”

Chris Schloemer, a Texas independent, agreed Trump holds responsibility for egging on the crowd with his baseless claims of election fraud. But, the 61-year-old doesn't lay the blame solely on Trump.

Schloemer feels Republicans in Congress have a hand in what happened that day, too: “I feel like people were afraid of Donald Trump, especially Republican politicians, and so they wouldn’t rein him in, and I think that just emboldened him."

And he's not alone. While views of Trump’s role have not changed since December, Americans are somewhat more likely now than they were then to say Republicans in Congress were significantly responsible for the events of Jan. 6.

Forty-six percent say that now, up slightly from 41% in December. An additional 21% say GOP lawmakers had some responsibility and 30% say they were not responsible. The change in the share saying Republicans in Congress have a large amount of responsibility was driven mostly by Democrats and independents.

Ulysses Bryant, a Democrat from Florida, said while he always believed Trump and the rioters should be charged with a crime, he hadn’t known of the involvement of congressional Republicans until he began to follow the hearings.

Close to 6 in 10 Americans — 56% — say they followed news about the congressional hearings. A smaller but still sizeable share -- 42% -- say they watched or listened.

The nine-member panel, comprised of seven Democrats and two Republicans, has worked around the clock for the past year to investigate the connection between Trump and his allies and the violence and chaos that ensued on the Capitol. The public hearing phase of their investigation is meant to put all of that investigative work on display to the American public in an effort to create a historical record of what occurred.

Seventy-five percent of Democrats and 42% of Republicans say they followed news about the hearings. More Democrats than Republicans also say they tuned in, 58% to 27%. The first of the public hearings, which began in early June, received high ratings for TV viewership, though subsequent hearings have received more modest ratings.

Kathlyn Keller, a retired investment banker from San Francisco, is one of the GOP voters who has tuned into the hearings and still believes Trump holds no responsibility for the events of that day.

The 83-year-old thinks the only people who should be charged are those who brought weapons to the Capitol, or anyone who got into the building and caused damage inside. Trump “absolutely shouldn’t be charged with anything,” she told AP.

Nonetheless, the committee plans to continue its congressional probe and present new evidence in the coming weeks to its many viewers, including the most important one: Attorney General Merrick Garland. Regardless of public opinion about Trump's likely criminal involvement, lawmakers continue to face a stark reality: While they can investigate Jan. 6 and issue subpoenas to gather information, only the Justice Department can bring criminal charges.

But there are clear signs in recent weeks that the Justice Department appears to be escalating its probe of pro-Trump efforts to overturn the 2020 election. Federal agents on Wednesday seized the cell phone of Trump lawyer John Eastman, who was the architect behind a plan to pressure then-Vice President Mike Pence into rejecting the electoral college results.

Last week, authorities searched the Virginia home of Jeffrey Clark, who was known at the Justice Department to champion Trump’s false claims of election fraud. Agents also served subpoenas to the Republican Party chairmen of Arizona, Nevada and Georgia, three states that went for President Joe Biden and where Trump allies created slates of “alternate electors” intended to subvert the vote. And Republicans in two other states — Michigan and Pennsylvania — disclosed they had been interviewed by the FBI.

The poll of 1,053 adults was conducted June 23-27 using a sample drawn from NORC’s probability-based AmeriSpeak Panel, which is designed to be representative of the U.S. population. The margin of sampling error for all respondents is plus or minus 4 percentage points.